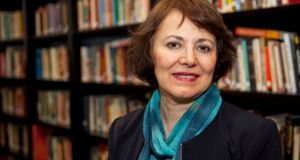 Iran said on Monday it had freed an Irish-Canadian-Iranian academic detained since June, a week after Iran and Canada began talks on a potential restoration of diplomatic relations.

Homa Hoodfar (65) is a teacher at Concordia University in Montreal, Canada, and an expert on gender and Islam.

She became an Irish citizen through marriage to an Irish man and her family have said she has a “deep bond” with the Irish community in the UK.

Ms Hoodfar’s health was said to be deteriorating; she suffers from a rare neurological condition – myasthenia gravis – that requires close medical supervision and medication.

“Homa Hoodfar, the retired professor of Canadian universities, who had been detained in Iran based on some accusations, was released this afternoon for humanitarian reasons including illness,” Iranian foreign ministry spokesman Bahram Qasemi said.

He said Ms Hoodfar had left Iran and was travelling to Canada via the Gulf Arab state of Oman.

Oman confirmed it had arranged for a royal air force plane to fly Ms Hoodfar to Muscat on her way to Canada, state news agency ONA quoted a foreign ministry statement as saying.

Iran’s Revolutionary Guards have arrested at least seven dual-nationality citizens or expatriates visiting the country over the past year, the highest such number in acknowledged detention in recent years.

Oman, an ally of the West that also maintains good relations with Tehran, has previously helped facilitate prisoner exchanges between Iran and the US.

Canada shut its embassy in Iran and expelled all Iranian diplomats in Canada after accusing Tehran of posing the biggest threat to global security, mainly over its nuclear programme and military assistance to Syrian president Bashar al-Assad.

Since striking a deal with world powers last year under which it curbed its nuclear activity in exchange for sanctions relief, pragmatist Iranian president Hassan Rouhani has sought to mend ties with the West to improve the economy.

However, the potential diplomatic opening has been resisted by powerful hardliners in the Iranian leadership, including the Revolutionary Guards.