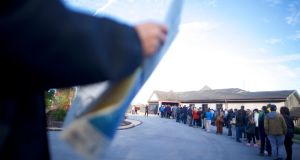 Voters in Phoenixville, Pennsylvania on on November 8th. Green Party candidate Jill Stein has sought a recount in the state amid accusations of voting irregularities and hacks. Photograph: Mark Makela/The New York Times

Green Party candidate Jill Stein has filed for a recount of votes in the US presidential ballot in the state of Pennsylvania, extending her scrutiny of voting to a second state won by Republican Donald Trump.

Ms Stein has already requested a recount of votes in Wisconsin and is expected to submit paperwork to seek another assessment of voting in Michigan, covering all three Rust Belt states that secured Mr Trump’s victory.

The president-elect swept the three states to win the White House in the November 8th election, beating Hillary Clinton by 306 electoral votes to 232, despite losing the nationwide popular vote by more than two million votes.

Mrs Clinton leads Mr Trump by 64.6 million to 62.4 million votes but the Republican beat her in the crucial swing states, sealing victory by a mere 107,000 votes in Pennsylvania, Wisconsin and Michigan.

Michigan’s election officials certified Mr Trump’s 10,704-vote victory on Monday, giving him a winning margin of just a fifth of a percentage point and the narrowest win in presidential voting in the state in more than 75 years.

Mr Trump won Pennsylvania by a larger margin – 71,303 votes, or about 1 per cent – becoming the first Republican to win both that state and Michigan since George HW Bush in 1988.

Ms Stein secured only 49,182 votes in Pennsylvania to 2,936,089 for Mr Trump and Mrs Clinton’s 2,864,786, but has sought a recount amid accusations of voting irregularities and hacks during the campaign.

“We must recount the votes so we can build trust in our election system,” she said. “We need to verify the vote in this and every election so that Americans of all parties can be sure we have a fair, secure and accurate voting system.”

The Green Party nominee raised $6.2 million (€5.8 million) in four days to pay for the cost of the presidential election recount across the three states. She has until Wednesday to ask for a recount in Michigan.

Mrs Clinton has joined Ms Stein’s request for a recount in Wisconsin and agreed to assist her efforts to take a second look at the votes in other states, including Pennsylvania and Michigan.

This drew an angry response from Mr Trump over the weekend. He unleashed a torrent of criticism on Twitter, his favourite forum for public pronouncements, posting messages over a 12-hour period on Sunday that even questioned the legitimacy of the election that he won.

The president in waiting alleged – falsely – that “millions” voted illegally in the presidential election as he attempted to question Mrs Clinton’s advantage in the popular vote – a claim that resurrected Mr Trump’s contentious charge during the bitterly fought campaign that the electoral system was “rigged”.

Earlier, Mr Trump launched a blistering Twitter onslaught against Mrs Clinton for supporting the Green Party’s recount request, branding the move as “sad”. He noted how the Democrat had during the campaign described his one-time refusal to accept the result of the election as “a direct threat to our democracy”.

The White House stepped into the debate with President Barack Obama’s spokesman Josh Earnest telling reporters on Monday that there was a difference between Mr Trump’s “unfounded claims of fraud” and a “conscientious interpretation” of the recount law that is consistent with the rules that Democrats and Republicans alike apply.

Mrs Clinton’s campaign lawyer Marc Elias said her camp had not found evidence of hacking or outside attempts to alter the voting technology, but felt obliged to support efforts to ensure the reporting of an accurate vote.

Earlier this month a group of computer scientists and election lawyers called for a recount of votes in Wisconsin, Michigan and Pennsylvania on the basis of findings that showed Mrs Clinton received 7 per cent fewer votes in counties that relied on electronic-voting machines compared with counties that used scanners and paper ballots.