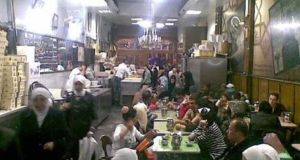 Bakdash, a modest shop planted in the centre of 18th-century Souq al-Hamidiya in Damascus, is mobbed from morning to night

Four years of warfare, destruction, displacement and sanctions have shattered the Syrian economy. Its currency value has fallen dramatically from 55-60 liras to 220-250 to the dollar. Inflation is running at 30 per cent, and unemployment at 60 per cent, according to business consultant Nobel Sukkar.

Nevertheless, some veteran firms are flourishing, new companies are being set up and businessmen are returning to government-held Damascus and the coastal cities. Syria is not only making but also exporting two of its traditional products, ice cream and chocolates.

While the cotton mills and pharmaceutical plants of Aleppo have been looted and their machinery smuggled across the border into Turkey, Bakdash, a modest shop planted in the centre of 18th-century Souq al-Hamidiya in Damascus, is mobbed from morning to night. For Syrians, Bakdash is synonymous with ice cream – Arabian ice cream.

Mwaffaq Bakdash joins me at a table in the crowded shop. They serve 15,000 customers a day, he says. Ottoman pashas and officials were there when the shop was opened in 1895 by his father, Muhammad Hamdi Bakdash, who died in 1966 at the age of 100.

He invented the recipe and method Bakdash still follows for its pistachio-clad “bouza”, an elastic confection made of milk and heavy cream; mastic, an aromatic resin collected from the resin tree; and sahlab, flour ground from a tuber belonging to the orchid family. Fresh fruit and rose essence flavours are also made as well as a range of milk puddings: the same menu as adopted by the founder in the same shop.

Bouza was frozen in a metal container sunk in a wooden barrel filled with ice and salt. The bouza was pounded with a long-handled mallet. Today, stainless steel containers are fixed into a refrigeration unit. “We make all the tools we need,” says Bakdash.

Early on “there was no electricity. In the winter we used to collect ice from Jebal Shaikh [the nearest high mountain] and store it in 20 caves” for the making and preserving of the ice cream. Donkeys and horses ferried ice to the shop as needed. “Our shop continued with this method until electricity came in 1922,” he says.

“We did not close when the Turkish period ended [with the collapse of the Ottoman Empire] and the French colonial period began” after the first World War.

“Lawrence of Arabia visited us in 1927-1928,” says Bakdash. The shop stayed open during the struggle for independence, achieved in April 1946, and has continued to trade ever since, receiving Arab and foreign emirs, presidents and personalities.

The missionary founder – whose two sons and their own four sons now run the business – began exporting trained workers to make bouza in Turkey in 1897, France in 1903 and England in 1905.

Others were sent to Russia and the US, where the name Bakdash survives. It has also established a branch in Jordan, where more than a million Syrian refugees have settled since the outbreak of war.

Dutch woman Nicole Wouters and her Syrian husband Anas al-Jazayri opened their first chocolate factory in the Qaddam suburb in 2003 but had to abandon it when it was occupied by militants. “We cannot go there and don’t know what happened to it. If it was bombed, looted,” says Anas. They initially set up a “chocolate lab” for high-end chocolates connected to a shop in Damascus’s diplomatic quarter, competing with Ghraoui, which began making award-winning chocolates in 1931.

The factory is located in a fenced compound surrounded by tall juniper trees, and exudes the aromas of warm chocolate, caramel and toffee. Nicole, who followed her grandmother into chocolate-making, takes me on a tour of the plant where 50 workers, mainly women in headscarves, tend the mixers and assembly lines that carry the sweets from each stage and finally to wrapping or boxing.

“We make two qualities: expensive hand-made chocolates and affordable chocolates,” she says. These are made under the Choco D’Or label as well as toffees, jellies and hard sweets. “We plan to hire another 10 women,” giving work to 60 families. “We need to work around the clock,” says Nicole.

“Our distributor comes every day and collects the output for delivery of expensive chocolates to 75 outlets and affordable sweets to hundreds of shops in Damascus, Sweida, Tartous, and Latakia.”