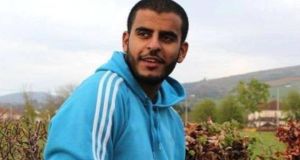 Ibrahim Halawa, the Irish teenager awaiting trial for almost two years in an Egyptian prison, has gone on hunger strike, according to a smuggled letter detailing his fears of torture and abuse at the hands of guards.

Mr Halawa’s family say they are increasingly concerned for his mental wellbeing after his case was adjourned earlier this month for the seventh time.

In correspondence pleading for his human rights, the 19-year-old said he would go on hunger strike until he is allowed home. He is on trial with about 420 others who were detained at the Fatah mosque in central Cairo in August 2013 following a confrontation with security forces in the aftermath of Muslim Brotherhood president Mohamed Morsi’s ousting.

“Where is human rights? When every morning I wake up to noises of torture knowing I can be next!” Mr Halawa writes in the small note, the authenticity of which has been confirmed by his family in Ireland.

“Where is human rights when I have been thrown in prison for two years with no evidence?

“Where is the human right when I don’t see the light of the sun? Hit for every word I say that the officer doesn’t like, not allowed hug my own mother.”

Mr Halawa also describes being crammed with 40 others into a room designed to hold 10.

The Irish Embassy and Department of Foreign Affairs say they have pressed for his release on bail, allowing him to return to Ireland.

She said they are being denied any information on Mr Halawa’s condition.

“It’s just coming to the stage where we are living as bodies without souls. Everyone is pretending they are alive but they aren’t,” she said.

“We are coming to the stage where we are just losing all hope.”