Group wants to reach out to country’s traditional allies, including US and Saudi Arabia 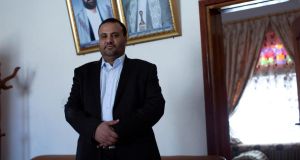 Saleh Ali al-Sammad: “Ansar Allah does not want anything more than partnership, not control. This was not a coup.” Photograph: Tyler Hicks/The New York Times

In his first interview since the Yemeni government collapsed, the leader of the Houthi militants in control of Sanaa, the capital, depicted his movement as eager to share power with its rivals and to reach out to the country’s traditional allies, including the United States and Saudi Arabia.

Saleh Ali al-Sammad, the senior Houthi official in Sanaa, made the remarks as a new round of United Nations-mediated talks among the Houthis and other major political parties to form a government entered a second day. Yemen has been without a leader since the president and his cabinet resigned January 22nd, citing Houthi pressure and attacks.

Al-Sammad’s remarks, and his unusual willingness to be interviewed by an American news organisation, suggested that the Houthis were anxious to climb down from the position they took last Friday, when they declared a unilateral plan for forming a new government and choosing a presidential council to rule in place of the ousted president, Abed Rabbo Mansour Hadi.

“The constitutional declaration is not open for discussion, but all the details are open to negotiation,” said al-Sammad, referring to the Houthis’ governance plan. That plan called for their revolutionary committees to choose a national council to replace the parliament. The national council would then choose a five-member presidential council to govern the country. “It is now being negotiated and most of the parties are ready to accept it,” he said.

“Ansar Allah does not want anything more than partnership, not control,” said al-Sammad, using the formal name of the Houthis’ movement. “This was not a coup.” He said the Houthis had no choice but to declare a governing formula to force the other parties to negotiate. “We felt the opposition wanted to waste time so that any problems could be blamed on us,” he said.

The Houthis took de facto control of Sanaa in September and went into protracted negotiations with the government over a greater share of power, and seats in the cabinet, for their followers. A political movement based in northern Yemen among the Zaydi minority, members of an offshoot of Shiite Islam, the Houthis fought wars with the central government over the past decade, which culminated in their move on the capital.

The Zaydis represent about a third of the population in a country that is otherwise Sunni Muslim. Hadi had appointed al-Sammad as his presidential adviser when the Houthis seized the capital. He was explicitly charged with making sure that Hadi consulted with him on major decisions. Al-Sammad is viewed as second in political importance to the Houthis’ top leader, Abdul-Malik al-Houthi, who rarely leaves his northern stronghold of Saada.

The latest stage of the crisis came when the Houthis began besieging the presidential palace in January, demanding a greater share of power. Hadi said the attacks left him and his government with no choice but to resign, and the Houthis effectively took control of the government and the military.

Over the weekend, the UN secretary-general called for Hadi’s return to office, and the six-member Gulf Cooperation Council, led by Saudi Arabia, called the Houthis’ declaration of a government plan a coup. Al-Sammad said Hadi could not be restored to power because he had resigned of his own will. “He no longer wants to be president,” he said.

Aides to Hadi, as well as other government officials, have said that he remains under house arrest. – (New York Times)