Formation of ‘Islamic State’ is a threat to all countries, says Iraqi army

An offshoot of al Qaeda which has captured territory in Iraq and Syria has declared itself an Islamic "caliphate" and called on factions worldwide to pledge their allegiance, in a statement posted on Islamist websites and Twitter. Video: Reuters 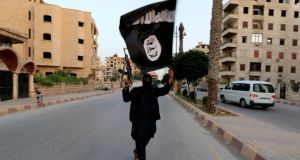 A member loyal to the Islamic State in Iraq and Syria (Isis) waves their flag in Raqqa yesterday. The group has declared itself an Islamic ‘Caliphate’ and called on factions worldwide to pledge their allegiance. Photograph: Reuters

Iraqi troops battled to dislodge an al-Qaeda splinter group from the city of Tikrit today after its leader was declared caliph of a new Islamic state in lands seized this month across a swathe of Iraq and Syria.

Alarming regional and world powers, the Islamic State in Iraq and Syria (Isis), also known as the Islamic State in Iraq and the Levant, claimed universal authority, declaring its leader Abu Bakr al-Baghdadi was now caliph of the Muslim world - a mediaeval title last widely recognised in the Ottoman sultan deposed 90 years ago after the first World War.

“He is the imam and caliph for Muslims everywhere,” group spokesman Abu Muhammad al-Adnani said in an online statement yesterday, using titles that carry religious and civil power.

The move, at the start of the holy month of Ramadan, follows a three-week drive for territory by Isis militants and allies among Iraqi’s Sunni Muslim minority. The caliphate aims to erase colonial-era borders and defy the US- and Iranian-backed government of Shia prime minister Nuri al-Maliki in Baghdad.

It also poses a direct challenge to the global leadership of al-Qaeda, which disowned Isis, and to conservative Gulf Arab Sunni rulers, who already view the group as a security threat.

The Iraqi government has appealed for international help and has accused Sunni neighbours, notably Saudi Arabia, of having fostered Islamist militancy in Syria and Iraq. Iraqi army spokesman Qassim Atta said declaring a caliphate could backfire by showing that Baghdadi’s group posed a risk to other nations:

“This declaration is a message by Islamic State not only to Iraq or Syria but to the region and the world. The message is that Islamic State has become a threat to all countries,” he said. “I believe all countries, once they read the declaration, will change their attitudes because it orders everybody to be loyal to it.”

The fighting in Iraq, the second biggest oil producer in OPEC, has contributed to a rise in analysts’ forecasts for the global price of crude, a Reuters poll found. The consensus view of the average 2014 price of a barrel of Brent rose more than $2 to $108 in the course of the past month.

Fighters from the group overran the Iraqi city of Mosul on June 10th and have advanced toward Baghdad, prompting the despatch of US military advisers. In Syria, Isis has captured territory in the north and east, along the desert frontier with Iraq.

Mr Maliki’s government, with the help of Shia sectarian militias, has managed to stop the militants short of the capital but has been unable to take back cities its forces abandoned.

The army attempted last week to take back Tikrit but was unable to seize the city, 160 km north of Baghdad. Helicopters hit Isis positions overnight. On the southern outskirts, a battle raged into today, residents said.

Tikrit was the home city of Saddam Hussein, whose overthrow by US forces in 2003 ended a long history of domination by Sunnis over what is today a Shia majority in Iraq.

The fighting has started to draw in international support for Baghdad, two and a half years after US troops pulled out.

Armed and trained by the United States, Iraq’s armed forces crumbled in the face of the Isis onslaught and have struggled to bring heavier weaponry to bear. Only two aircraft - turboprop Cessna Caravans normally used as short-range passenger and cargo carriers - are capable of firing the powerful Hellfire missile.

The US is flying armed and unarmed aircraft in Iraq‘s airspace but says it has not engaged in fighting.

Russia has sent its first warplanes to Baghdad, filling an order for five second-hand Sukhoi Su-25 ground attack jets. The government said they will be operational within a few days.

In Falluja, where Isis fighters have been in control for six months just west of Baghdad, a bank accountant who asked to remain anonymous for fear of retribution said the announcement of the caliphate was a “step backward”: “It will only turn the government even more hostile to us,” he said. “This will isolate us further from the rest of the world.”

Isis has used alliances with other, less radical Sunni armed groups and tribal fighters who are disillusioned with Mr Maliki. Members Saddam’s secular Baath party have also fought in the revolt.

Fawaz Gerges, a Middle East expert at the London School of Economics, said he expected the declaration would alienate Isis’s allies: “The strategic goal of the Baathists’ is the capture of Baghdad, not the establishment of the caliphate.

“Isil‘s pronouncement will most likely intensify the intra-jihadist struggle and widen the split between Isil and its insurgent Sunni allies in Iraq,“ he said.

The term caliph indicates a successor to the Prophet Mohammad, with temporal authority over all Muslims.

Traditionally it denotes a political and military leader with religious elements. Rival claims to the succession lie at the root of the 7th century schism between Sunnis and Shias.

Following Turkey’s defeat in the first World War and the carving up of its Middle East empire by Britain and France, new Turkish nationalist rulers in 1924 formally abolished the caliphate that Ottoman sultans had held for nearly five centuries.

For many militant Islamists, who see a decline in religious observance and divisions among Muslims as causing many problems, the restoration of the caliphate has been an important goal.

According to the mid-20th century Egyptian Islamist writer Sayyid Qutb, whose ideas later helped form those of al-Qaeda, in order to bring about a new caliphate, at least one state must revive Islamic rule - a role al-Qaeda founder Osama bin Laden thought in the 1990s might be filled by Taliban-run Afghanistan.

Since the Ottoman collapse, Sunni Islam has lacked an internationally recognised clerical hierarchy. Senior figures generally hold authority within a single country. Among the most prominent of these is the Grand Mufti of Egypt, whose spokesman dismissed the new caliphate in Iraq and Syria as an “illusion”.

“Isis’s announcement of what they called the Islamic caliphate is merely a response to the chaos which has happened in Iraq as a direct result of the inflammation of sectarian conflict in the entire region,” Ibrahim Negm said in Cairo.

Isis has followed al-Qaeda’s hardline ideology, viewing Shias as heretics, but has alienated bin Laden’s successor Ayman al-Zawahri and other Islamists with its extreme violence.

Isis’s declaration could isolate allies in Iraq and lead to in-fighting. Such internal conflicts among rebel groups in Syria has killed around 7,000 people there this year and complicated the three-year uprising against Syrian president Bashar al-Assad, another ally of Shia Tehran.

The group crucified eight rival rebel fighters in Syria, a monitoring group said yesterday. And in the Syrian city of Raqqa, controlled by Isis, militants held a parade to celebrate the declaration of the caliphate.

Some analysts say the group is a threat to frontiers and is stirring regional violence while others say it exaggerates its reach and support through sophisticated media campaigns.

Isis also released a video called Breaking of the Borders, promoting its destruction of a frontier crossing between the northern province of al-Hasakah in Syria and Nineveh province in Iraq, said SITE, which tracks militant websites.