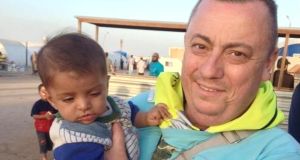 An appeal for Mr Henning’s release has been made by over 100 senior Muslim leaders. Photograph: PA Wire

The wife of a British hostage being held by Islamic State made a dramatic appeal last night for his release.

The statement was released as rumours circulated on social media that the Manchester taxi driver who was seized while delivering aid to Syria has become the latest hostage to be killed by Islamic State (IS) militants.

“Alan was taken prisoner last December and is being held by the Islamic State.

Alan is a peaceful, selfless man who left his family and his job as a taxi driver in the UK to drive in a convoy all the way to Syria with his Muslim colleagues and friends to help those most in need.

“When he was taken he was driving an ambulance full of food and water to be handed out to anyone in need.

“His purpose for being there was no more and no less. This was an act of sheer compassion.

“I cannot see how it could assist any State’s cause to allow the world to see a man like Alan dying.

“I have been trying to communicate with the Islamic State and the people holding Alan. I have sent some really important messages but they have not been responded to.

“I pray that the people holding Alan respond to my messages and contact me before it is too late.

“When they hear this message I implore the people of the Islamic State to see it in their hearts to release my husband Alan Henning.”

Abu Mohammed al-Maqdisi, who was released by Jordan in June after serving a five-year sentence on terror charges, said in a statement posted on his website and by a militant forum today that non-Muslims who help weak and poor Muslims should be respected and protected.

Al-Maqdisi, also known as Essam al-Barqawi, was the mentor of Abu Musab al-Zarqawi, the leader of al-Qaeda in Iraq who was killed in a US airstrike in 2006. The Islamic State group, which has beheaded two American journalists and a British aid worker, has threatened to kill Mr Henning in retaliation for US and European military action against it.

Various representatives of the Muslim community have issued pleas to IS fighters to release the 47-year-old.

Mr Henning was shown in a video ahead of his trip to Syria last December saying the dangerous journey is “worthwhile” to help those in need. Majid Freeman, who travelled to Syria with Mr Henning, made a direct appeal to his captors.

“Please show him some mercy and understand he is a humanitarian aid worker. He’s not a fighter, he’s not come there for no political reasons, he’s come there strictly to help the people,” he said in a BBC interview.

More than 100 Muslim leaders have signed a statement to IS pleading for his release and criticising them as “monsters” for the brutal murder of Mr Haines. “We, the undersigned British Muslim Imams, organisations and individuals, wish to express our horror and revulsion at the senseless murder of David Haines and the threat to the life of our fellow British citizen, Alan Henning,” said the leaders in a letter published in the Independent.

They said those holding Mr Henning hostage must accept that what they are doing is against the Koran and “constitutes the worst condemnable sin”. In another appeal online, Abu Bakr al-Baghdadi, representing British Muslim aid workers, told of the various ways Mr Henning had raised money to bring to Syria, having been moved by the plight of people there.

In an emotional speech to the camera Mr al-Baghdadi said: “You have the ability to spare the life of this innocent man. We beg you to tread the path of justice and show him the compassion that Allah has placed in the hearts of the believers and in your heart.”