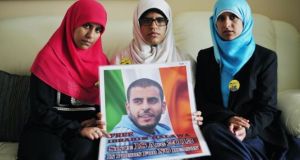 Omaima (left) Fatima and Somaia Halawa sisters of Ibrahim Halawa aged 18 who is currently in prison in Egypt, pictured in their home in Dublin. Photograph: Aidan Crawley

The Cairo trial of Irish national Ibrahim Halawa has been postponed until next month.

Mr Halawa (18) is charged with murder, attempted murder and destruction of public property during an attack on a police station in August 2013.

He was among nearly 500 people arrested at Cairo’s Al-Fath mosque following protests against the ousting of former Egyptian president Mohammed Morsi last year. Mr Halawa and his 493 co-accused will now go on trial on January 6th.

This is the third time the proceedings have been postponed due to the difficulty of processing such a large number of accused, who should be simultaneously present in the cages that serve as the dock in Egyptian courts.It was expected that at least least preliminary proceedings would go forward.

Khaled Mansour, executive director of the Egyptian Initiative for Personal Rights, told The Irish Times that this is precisely one of the issues they take up.

“ [AS]trials are postponed for months, even a year,” because the security forces warn against moving prisoners during such times. Consequently, “pretrial detention is turned into a punitive measure,” he said.

“We are worried,” he continued, that the “justice system is becoming selective” with some “cases being reviewed within a month” and others dragging on.

Mr Halawa was not committing a crime [by demonstrating], said Mr Mansour. Unlicensed protests were only banned at the end of November that year.

However, he said the problem was that the August 16th-17th protests were not peaceful and the security forces responded with considerable ferocity.

Irish Ambassador Isolde Moylan managed to obtain a safe passage out of the mosque where Mr Halawa and his three sisters - Somaia (28), Fatima (23), and Omaima (21)- were trapped and their exit to Ireland. However, they refused and were arrested.

The three sisters were held for three months, released, and permitted to return to Ireland. They refuse to return to Egypt to face trial but Mr Halawa has re mained in detention.

The Halawa siblings’ father is Sheikh Hussein Halawa, Ireland’s most senior Muslim cleric, imam of the mosque and head of the Islamic Cultural Centre in Clonskeagh, Dublin.

Amnesty International has called for Mr Halawa’s immediate and unconditional release and pointed out that a overwhelming number of the 494 defendants are charged with murder and attempted murder,“offences that are normally punishable by death under Egyptian law.”

The rest are charged with destroying public property, protesting without authorisation, attacking security forces and obstructing the operations of national institutions.

Colm O’Gorman, executive director of Amnesty International Ireland, said Mr Halawa, who was a 17-year old minor at the time of his arrest, is regarded as a “prisoner of conscience” by the organisation. He has been imprisoned for 450 days awaiting trial.

“This is unacceptable. Amnesty International’s researchers have conducted a thorough examination of the case [and] established that he is entirely innocent of the crimes with which he is being charged” as he was not “at the location of the alleged shooting [but] locked...in the sancturary of the Al-Fath mosque,” he said.

Ms Moylan and Mr Nolan were allowed to Mr Halawa at Tora prison, a compound an hour’s drive from central Cairo. “He was depressed,” she said.

Ms Moylan said the embassy and the Irish Government had hoped the trial would be completed by the end of the year and Mr Halawa acquitted so he “could return to his studies in January and graduate in June.”