One killed and more than 100 injured from live Israeli fire 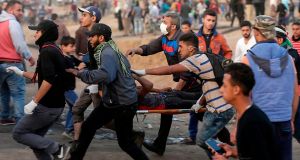 Israeli troops and Palestinian protestors clashed for the third consecutive weekend on Friday resulting in at least one Palestinian killed and more than 100 injured from live Israeli fire, according to the Gaza health ministry. Hundreds more were reported injured from inhaling tear gas.

However, the number of protesters – about 10,000 – was significantly lower than the two previous Fridays.

According to the Israeli military, the protesters threw an explosive device and firebombs at troops and there were several attempts to damage the border fence and infiltrate into Israel.

Senior Hamas official Ismail Radwan said in an interview near the border that the demonstrations were designed to send a message to the world.

“It’s time that our Palestinian people returned to their towns and villages [in today’s Israel], from which their fathers and grandfathers were forced out.”

“The desecration of the Muslim holy day of Friday with terrorism is heresy,” he wrote in a social media post. “In light of these [Hamas] intentions, the IDF again warns against approaching the security fence: Do not allow Hamas to exploit you to commit attacks because you are the ones who will pay the price.”

The army said troops were instructed to use crowd control measures and resort to live fire only to prevent infiltration attempts, militant attacks, or attempts to harm soldiers.

The six-week Great March of Return protest is set to end on May 15th, the 70th anniversary of the Palestinian Nakba, or “catastrophe”, when the state of Israel was created, leaving hundreds of thousands of Palestinians as refugees.

Last Friday, about 20,000 Palestinians demonstrated along the Gaza border. The previous week there was an estimated 30,000 protesters. The Israeli military has been on high alert along the Gaza border since March 25th, dispatching reinforcements from infantry, armoured corps and combat intelligence units, alongside special forces, sappers and snipers.

Israeli forces have shot dead at least 31 Palestinians, including a journalist, and wounded many hundreds since the protests began, drawing international criticism of the lethal tactics used against the protesters.