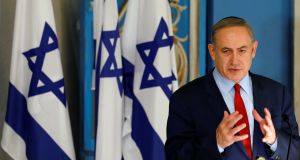 Israeli police questioned prime minister Binyamin Netanyahu on Friday for the third time this month as part of a criminal investigation into abuse of office, Israeli media has reported.

A police source confirmed the questioning took place but would not provide further details.

A Reuters cameraman at Mr Netanyahu’s official residence, where the questioning took place, said investigators were on the scene for three hours.

Police confirm they are questioning Mr Netanyahu as a suspect in two criminal cases, one involving gifts given to him and his family by businessmen and the other related to conversations he held with an Israeli publisher. He has denied wrongdoing.

If charges are brought, political upheaval in Israel would be likely, with pressure on Mr Netanyahu (67), to step down after 11 years in office, spread over four terms.

The first case - referred to by police as Case 1,000 - involves Mr Netanyahu and family members allegedly receiving gifts on a regular basis from two businessmen. Israeli media have reported that the gifts include cigars and champagne.

The second involves a deal Mr Netanyahu allegedly discussed with the owner of one of Israel’s largest newspapers, Yedioth Ahronoth, for better coverage in return for curbs on competition from a free paper owned by US casino mogul Sheldon Adelson.

Mr Adelson is a supporter of the prime minister and his newspaper is staunchly pro-Netanyahu.

Addressing parliament on Wednesday, Mr Netanyahu said there was nothing wrong with receiving gifts from close friends and that it was common for politicians to hold conversations with newspaper publishers. He accused opponents of trying to overthrow him.

‘Press charges at any cost’

“The goal is to pressure the attorney-general to press charges at any cost. There is no limit to the hounding, the persecution, the lies,” Mr Netanyahu said.

In a research note published this week, Moody’s rating agency said the investigations into Mr Netanyahu “are sufficiently serious that they could end his tenure as prime minister”.

“Should Netanyahu be forced to resign, it is likely that new elections would need to be held, since there is no clear successor in his Likud party.”

Under Israeli law, the prime minister is not obliged to resign even after he is charged, but he could be pressured into stepping down. Opponents are calling for him to do so.

Mr Netanyahu is not the first Israeli leader to have faced criminal investigation: former prime minister Ehud Olmert was convicted of breach of trust and bribery in 2014 , while the late Ariel Sharon was questioned while in office over allegations of bribery and campaign financing illegalities.