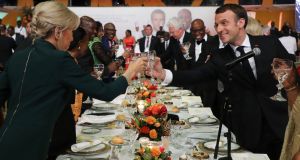 French president Emmanuel Macron and his wife, Brigitte Macron, at a gala dinner in Abidjan during a three-day visit to West Africa. Photograph: Ludovic Marin/ AFP

Emmanuel Macron is to give up his own generous presidential pension in an attempt to calm anger over politicians’ privileges, as French transport strikes caused chaos for Christmas travellers.

With rail strikes continuing into their third week and travellers scrambling to get home for the holidays, Mr Macron, who turned 42 this weekend, made the symbolic move to become the first president in more than 50 years to give up the automatic pension of more than €6,000 a month that all French leaders receive after leaving office, regardless of age or wealth.

Mr Macron’s office added that he would not take his seat in France’s constitutional court, where former presidents are members for life and receive a monthly allowance of €13,500.

“This is about being exemplary and coherent,” an Elysee official said.

Pro-business, Mr Macron is aware that the strikes over his planned pensions changes have increasingly focused on him personally, with caricatures and banners at street demonstrations depicting him as king.

Just as the gilets jaunes anti-government protesters earlier this year complained about Mr Macron building a swimming pool at a presidential summer retreat, and expensively upgrading Elysee carpets and crockery, banners at pensions protests mocked him and and other former presidents for their luxury lifestyles and generous settlements once they leave office.

The prime minister, Edouard Philippe, acknowledged recently that French people believed elected officials were privileged, promising that “in the new universal [pensions] system, they will be treated like any other French person”.

Le Parisien newspaper hailed Macron’s decision to forfeit his presidential pension as “breaking with a dusty tradition of republican monarchy”.

The left criticised it as a PR stunt, with the Communists saying Mr Macron, a former investment banker, had made millions in the private sector, so had a rare luxury of being able to give up his presidential pension.

Despite the strikes, the government insists it will plough ahead to unify the French pensions system, arguing that getting rid of the 42 special regimes for sectors ranging from rail and energy workers to lawyers and Paris Opera staff is crucial to keep the system financially viable as the population ages.

While some unions support a single system, almost all reject any tweaks relating to age. There is union anger over government plans to introduce a “pivot age” – keeping the legal retirement age at 62 but insisting on an additional two years’ of work until 64 to get a full pension.

With strikes set to continue into the new year, the pensions stand-off has become a personal issue for Mr Macron who had promised to deliver the biggest “transformation” of the French social model and welfare system since the postwar era.

The very essence of Mr Macron’s political identity is at stake. He has always said he preferred to make structural changes to the French model amid unpopularity than back down in the face of street protests. Failure to deliver the reforms would dent Mr Macron’s firm support base of about 25 per cent, which is crucial for any re-election bid in 2022. However, further negotiations with unions will be needed to agree any changes.

Travellers across France scrambled to begin their Christmas getaways amid train cancellations and packed roads, with the train operator SNCF warning the traffic would be “severely disrupted” over the festive period.

Despite calls by some unions to suspend strikes during the festive season, rail workers’ groups continued stoppages. The protest is also affecting businesses, particularly retail, with industry associations reporting declines in turnover of 30 per cent to 60 per cent compared with last year. An Ifop poll showed 51 per cent of French people either supported or sympathised with the strikes, slightly lower than the previous week.

Mr Macron urged the strikers to ease up for Christmas, saying they should embrace a “spirit of responsibility”. On a visit to Ivory Coast, he said: “Strike action is justifiable and protected by the constitution, but I think there are moments in a nation’s life when it is good to observe a truce out of respect for families and family life.”

Mr Macron used his west Africa trip to focus instead on foreign policy and France-Africa relations. He said “colonialism was a grave mistake” and called for “turning the page on the past”.