‘Be damned with them’: Summary justice for women accused of joining Isis 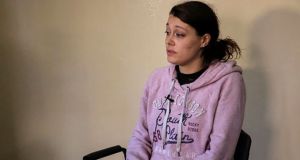 Emilie Konig, a 33-year-old French woman suspected of recruiting fighters for Islamic State and now in the custody of the Kurdish Syrian People’s Protection Units, speaking at an undisclosed location in Syria. Her future is uncertain. In Baghdad, more than 40 foreign women accused of joining Isis have been sentenced to death. Photograph: YPG press office/AFP/Getty Images

In a small holding room in a Baghdad court, French citizen Djamila Boutoutao cradled her two-year-old daughter and begged for help.

Boutoutao (29) is accused of being a member of the Islamic State terror group. Whispering in her native tongue within earshot of other accused Isis members – all foreigners like her – she said life had become unbearable.

“I’m going mad here,” said Boutoutao, a small bespectacled woman with a deadpan stare. “I’m facing a death sentence or life in prison. No one tells me anything, not the ambassador, not people in prison.”

Guards moved closer as Boutoutao continued. So did her fellow accused – all from central Asia or Turkey, who had all lost husbands and, in some cases, children as Islamic State, also known as Isis, collapsed in Iraq last year.

“Don’t let them take my daughter away,” she pleaded. “I am willing to offer money if you can contact my parents. Please get me out of here.”

With that, the short conversation was shut down and Boutoutao returned to a corner, waiting for the judge in the adjoining room to summon her. There were no French officials present, and nothing at all to connect her to her former life in Lille. If convicted of joining the terrorist group, she faces life in a central Baghdad jail, or death by hanging.

All the 15 women in court last week had been widowed by the war that eventually ousted Islamic State from much of Iraq, killing tens of thousands of its members and replacing its promises of an Islamic utopia with a crushing defeat. The women here had in some cases willingly joined the group, travelling alone from Europe and central Asia, or with their partners, to what they believed to be a promised land.

More than 40,000 foreigners from 110 countries are estimated to have travelled to Iraq and Syria to join the jihadist group. Of those, around 1,900 are believed to have been French citizens, and about 800 were British.

Boutoutao arrived in Iraq in 2014, with her husband, Mohammed Nassereddine, and two children. He was killed in Mosul in 2016 as was her son, Abdullah, one year later. She was captured by the Kurdish peshmerga in northern Iraq and eventually sent to Baghdad, where the fortified court in the centre of the capital has become a focal point of the post-Islamic State era.

Up to 1,000 women accused of belonging to Isis were rounded up from the ruins of Iraq’s towns and cities and are now being held in Baghdad to face a reckoning from a society and government that remains deeply scarred by the past four years, with much of their anger directed at foreign fighters and their families. Up to 820 infants accompany the women, with some others yet to be born.

The proceedings had a sense of urgency, and so did the 10-minute hearings in Baghdad’s central criminal court that have summarily dispensed with the accused foreign women, sentencing more than 40 to death, and dozens more to life in prison since the so-called caliphate crumbled .

Foreigners in particular, often carrying babies, are processed with an uncompromising efficiency rarely seen in other parts of Iraq’s judicial system. In mopping up the aftermath of Islamic State, the court system has taken on the role of bringing the country towards a closure. As Iraqis try to stitch their torn social fabric back together, a stark resentment remains towards the jihadists whose rampage took a toll on a national psyche that was yet to recover from sanctions, invasion and civil war.

France and other European countries remain hostile to those of their citizens who are now facing Iraqi courts, insisting they should face local justice abroad. The French government has shown some leniency towards children orphaned by the fighting, but none towards adults who made decisions to join the group.

Earlier this year, defence minister Florence Parly said those who did make it back to France would be “held to account for their acts”. French officials have told their counterparts in the region, however, that those who failed to escape can expect no comfort.

With Islamic State now all but ousted from Iraq’s lands, there is little talk of reconciliation. Asked what he would say to the leader of Isis, Abu Bakr al-Baghdadi, if he was put in front of him, Sheikh Qais al-Khazali, the leader of one of Iraq’s most feared Shia paramilitary groups, Asa’ib ahl al-Haq, said: “I would tell him he failed. He wasn’t good enough. He was nothing and he is beneath us all.”

Mustafa Rashid, a car dealer in east Baghdad was similarly scathing about the foreign prisoners. “Be damned with them,” he said. “They deserve no mercy. The women too.”

In the same court a day earlier, an Iraqi woman had been cleared of all charges and released after successfully mounting a defence that her brother had forced her to join Islamic State. While some Iraqi women, and large numbers of men, have been sentenced to death for their roles in the terrorist group’s rampage, only a small number of foreign women have received any concession

“In the minds of Iraqis and the judiciary and the government, by virtue of the fact that you are foreign and chose to live in Isis territory there is a level of agency in what you did and more culpability,” said Belkis Wille, the senior researcher for Iraq for Human Rights Watch. “It is not the same in the case of Iraqi women, where very specific evidence is often lessening sentences. If you buy a plane ticket, cross a border and make your choices, you are far more exposed.”

The Baghdad courtroom was bustling with men who were shuffled into a dock in the centre of the room. A group of 12 were sentenced to death by hanging, then escorted back to cells. Next it was Zahraa Abdel Wahab Al Kaja’s turn. Just turned 17, and originally from Tajikistan, she also cradled a baby, whom she had dressed in a hijab, and seemed disorientated.

“I was brought to Syria about five years ago with my mum and dad,” she said. “They married me to a Turkish man. He was good to me. This is his child. We settled in Iraq. My father and husband died. I am now imprisoned with my mother and daughter. I want to go back home, even though my country is no good. I didn’t wear hijab back home. Isis is good, it taught me how to cover myself.”

More women came and went: a Turk, a Russian, and two from Kyrgyzstan. In each case one of three judges asked several curt questions, then ordered the accused woman from the room. A prosecutor then made a short statement, and a defence lawyer read from a brief. Outside, one of the state-appointed defenders said he had not spoken with his client, and had only seen a summary of the investigation notes.

Human Rights Watch said that, despite its urging over the past two years, there had been no sign of lawyers playing a more proactive role, or the judiciary seeking more substantive evidence for prosecutions. Justice instead depended heavily on instinct, an official said during a break. “I’ve worked here for 10 years and I can tell who’s innocent with one look in their eyes. I can tell you horror stories and I can share moments of magic.”

Guards who bring the women from a nearby prison said most were unrepentant. “An Isis prisoner once asked me for something which I couldn’t provide and she called me an infidel.”

What to do with the children is a more vexing question for Iraqi authorities. Some infants chewed on apples while their mothers waited for their hearings. Others were passed around the women who each took turns at calming them.

“They will grow up to be just like [their mothers],” said one of the guards. “No, it’s a sin to say that,” said another. “All children are innocent.”

“Maybe,” came the reply. “But let’s finish with this quickly. There are still so many of them.” – Guardian