Battle of Mosul will be ‘no picnic’, warns Iraqi commander 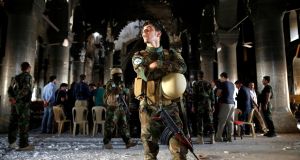 Iraqi Christian soldiers attend the first Sunday mass at the Grand Immaculate Church since it was recaptured from Islamic State in Qaraqosh, near Mosul, in Iraq. Photograph: Ahmed Jadallah/Reuters

Iraqi troops and security forces edged closer to Mosul on two southern fronts on Sunday, but a leader of the Shia militias newly participating in the offensive warned that the battle for Islamic State’s Iraq stronghold would be long and gruelling.

A military statement said the army’s Ninth Armoured Division raised the Iraqi flag in the village of Ali Rash, about 7km southeast of Mosul, after recapturing it from the ultra-hardline Sunni Muslim militants.

Further south, an interior ministry officer said security forces were advancing from the town of al-Shura, recaptured from Islamic State on Saturday, along the Tigris river valley towards Mosul 30km to the north.

The army and security forces, along with Kurdish peshmerga fighters, have been backed by US-led air and ground support in their two-week-old campaign to crush Islamic State in the largest city of its self-declared caliphate in Iraq and Syria.

Their battle for Mosul, still home to 1.5 million residents, could be one of the toughest in a decade of turmoil since the 2003 overthrow of Saddam Hussein, a Sunni Muslim, brought Iraq’s majority Shias to power.

On Saturday thousands of Iranian-backed Iraqi Shia militia fighters, known as the Hashid Shaabi (Popular Mobilisation) forces, joined the Mosul offensive, launching a campaign to take territory to the west of the city.

Their target is to seize the town of Tal Afar, 55km west of Mosul, from Islamic State.

Iraqi troops and Kurdish peshmerga fighters are already driving Islamic State fighters back on the southern, eastern and northeastern approaches to Mosul.

“There is cooperation between . . . the army, federal police, Hashid and counter-terrorism [forces] and also the [local Sunni] tribes,” said Hadi al-Amiri, head of the Badr Organisation, the most powerful group within the Popular Mobilisation forces.

Speaking in the village of Ain Nasir in the semi-arid land west of the Tigris, Amiri said the fight against Islamic State insurgents holding Mosul, who have already launched waves of suicide car bombs, roadside bombs and sniper attacks to slow down the advancing forces, could be long and bloody.

“The battle of Mosul will not be a picnic. It needs time, it needs precision, it needs a deep breath,” he said, wearing military fatigues and with his face wrapped in a white checked headscarf against the wind and sand.

“We are prepared for the battle of Mosul even if it lasts for months.”

President Tayyip Erdogan said the town of Tal Afar, which the Shia forces say they will recapture, is Turkmen – inhabited by people with strong cultural and historical links to Turkey – and said Ankara would act if the Popular Mobilisation forces “unleash terror” there.

Anticipating the offensive on Tal Afar, and highlighting its strategic importance, Islamic State has also been reinforcing the town in the last 48 hours, an Iraqi security official said.

He said two waves of reinforcements were sent including insurgents who had fought in neighbouring Syria and had experience in using anti-tank missiles.

His comments could not be independently verified but a resident of Mosul, speaking by phone, said relatives in Tal Afar reported seeing increasing numbers of Islamic State fighters in the town, some of them patrolling on motorbikes.

The Kurdish peshmerga said in a statement on Sunday they had cleared at least 28 villages north and east of Mosul since the start of the offensive.

Interior ministry rapid response forces, who took control on Saturday of the town of al-Shura, about 30km south of Mosul, advanced on Sunday a few kilometres northeast and took three villages from Islamic State, an officer said.

Human rights groups have warned of possible sectarian violence if the Shia paramilitaries seize areas where Sunni Muslims form a majority, which is the case in much of northern and western Iraq.