Australian special forces troops to operate on the ground in Iraq 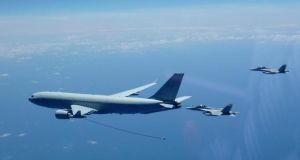 Australian special forces troops will be deployed in Iraq to assist in the fight against Islamic State militants, prime minister Tony Abbott said today, and its aircraft will also join US-led coalition strikes.

Abbott said in a nationally televised news conference the Australian troops would be engaged in an “advise and assist” capacity to support the Iraqi army in their battle against the militant Islamist group.

The United States has been bombing Islamic State and other groups in Syria for almost two weeks with the help of Arab allies, and hitting targets in neighbouring Iraq since August.

European countries have joined the campaign in Iraq, but not in Syria.

Last month, Abbott sent aircraft and 600 personnel to the United Arab Emirates in preparation for joining the coalition. He has since said it was likely Australian aircraft would join the strikes to combat Islamic State, which he described as a “murderous death cult”.

While the involvement of Australian aircraft had been flagged, the use of Australian troops on the ground in Iraq was not as widely anticipated.

So far Australian aircraft have been limited to humanitarian aid and delivering arms to Iraqi government-backed forces.

Australia is on high alert for attacks by radicalised Muslims or by home-grown militants returning from fighting in the Middle East, having raised its threat level to high and undertaken a series of high-profile raids in major cities.

Officials believe up to 160 Australians have been either involved in fighting in the Middle East or actively supporting groups fighting there. At least 20 are believed to have returned to Australia and have been said to pose a security risk.

One man was charged on Tuesday with funding a terrorist organisation, while another was arrested last month after police said they had thwarted a plot to behead a randomly selected member of the public.

Prominent Australian Muslims say their community is being unfairly targeted by law enforcement and threatened by right-wing groups, and there are concerns that policies aimed at combating radical Islamists could create a backlash.

The Australian contingent in the UAE is made up of eight Super Hornet fighter jets, an early warning and control aircraft, an aerial refueling aircraft, along with 400 air force personnel and 200 special force soldiers.

Meanwhile, Turkey’s parliament has given approval in principle for military action in Syria and Iraq, and the use of Turkish soil by foreign troops.

Members of prime minister Ahmet Davutoglu’s ruling party and nationalists backed the motion, a broad mandate for an armed response to security threats that include Syrian President Bashar al-Assad’s army and the Kurdish rebel organization PKK, based in northern Iraq, as well as the jihadists.

It passed by 297 votes to 100, the assembly said in a final tally after the elimination of invalid votes.

“The bill clarifies Turkey’s stance and allows our government and armed forces to take quick and effective measures against threats toward our national security on a legal basis,” Turkish Prime Minister Ahmet Davutoglu told A Haber television. “Islamic State’s seizure of all border crossings or Syrian regime’s air strikes primarily on Aleppo would mean greater waves of refugees for Turkey. We can’t be a spectator, it is out of the question.”