Anger and ridicule in Israel at Sean Spicer’s Hitler comments 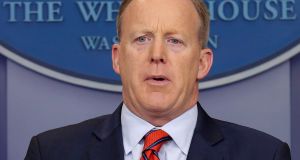 White House press secretary Sean Spicer tried to suggest that even Adolf Hitler had not used poison gas on his own people. Photograph: Joshua Roberts/Reuters

Israeli politicians and commentators have reacted with fury and incredulity to comments made by Sean Spicer, the White House press secretary, in which he suggested Hitler had not used poison gas on his own people and called Nazi extermination camps “Holocaust centres”.

During a White House press briefing on Monday, Mr Spicer tried to suggest that even Adolf Hitler, in contrast to the Syrian leader, Bashar al-Assad, had not used poison gas on his own people, ignoring the Nazi extermination of German Jews and non-Jews using gas chambers and trucks.

“We didn’t use chemical weapons in the second World War,” said Mr Spicer. “You know, you had someone as despicable as Hitler who didn’t even sink to using chemical weapons.”

Mr Spicer’s assertion during the Jewish holiday of Passover provoked instant outrage on social media and from some Holocaust memorial groups, who accused him of minimising Hitler’s crimes.

Leading the charge was Yisrael Katz, a member of Likud, the party of the Israeli prime minister, Binyamin Netanyahu, who holds the intelligence and transportation portfolios in the Israeli cabinet.

In an unusually strong intervention from a member of the right-wing government towards the Trump administration, Mr Katz wrote on Twitter: “Sean Spicer’s statement that Hitler didn’t use chemical weapons is severe and outrageous. We have a moral obligation that supersedes policy considerations. We must demand that he apologise, or resign.”

Speaking on Israel’s army radio on Wednesday morning, Mr Katz amplified his criticism. “As a minister in the government of Israel, I felt that in this case, despite the close relationship and the aid that the United States gives Israel, there are moral matters that go above the diplomatic considerations,” he said. “We have an obligation that we can’t ignore something like this.”

However, Mr Katz later appeared to accept Mr Spicer’s apology. “Since he apologised and retracted his remarks, as far as [I] am concerned, the matter is over,” he said in a statement, citing the “tremendous importance of historical truth and remembrance” of Holocaust victims.

Shortly after Mr Spicer’s press briefing, the MP Erel Margalit from the centrist Zionist Union called for the Israeli government to “break its silence” and officially condemn the comments.

“I am worried about the problematic influence of certain players that have recently entered the White House, specifically Holocaust deniers,” Mr Margalit said in a statement.

“The White House urgently needs a history teacher,” Mr Shai said. “Ignorance is not acceptable. Hitler used chemical weapons of mass destruction in a large scale that human history hadn’t seen until then, and since then.

“This a second failure of the White House recently, regarding the biggest tragedy that occurred to the Jewish people and took place in the twentieth century,” he added, referring to a White House statement on International Holocaust Remembrance Day that failed to mention directly the fate of Europe’s Jews.

Israel’s official Holocaust remembrance centre, Yad Vashem, issued a statement expressing “deep concern regarding the inaccurate and insensitive use of terms related to the Holocaust by the White House press secretary”.

“His statements imply a profound lack of knowledge of events of the second world war, including the Holocaust,” it said. “Moreover, they are liable to strengthen the hands of those whose goal is to distort history.”

Israeli media was full of hostile commentary on Wednesday morning.

“It’s hard to believe that a person who doesn’t know what happened in Adolf Hitler’s crematoria reached the high-ranking position of White House press secretary,” she wrote.

“Spicer repeated the foolish comment twice – once at his own initiative and a second time after a journalist reminded him of what he had forgotten, or what he didn’t know, or what he preferred not to know – and Spicer just went on.”

“First, Spicer’s sweeping claim that even Hitler didn’t sink to using chemical arms is just flat out wrong. In fact, Hitler used chemical weapons, gases such as carbon dioxide, carbon monoxide and Zyklon B, to kill more people than anyone in history.

“Second, Spicer’s attempt to clarify his remark by saying that, unlike Assad, Hitler didn’t gas his own people is also mistaken. Hitler killed more than 200,000 Germans – both Jews and non-Jews.”