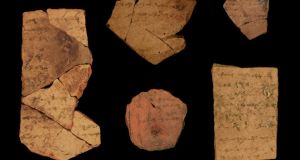 A photo from the Israel Antiquities Authority shows letters inscribed on pottery unearthed in a fort in Arad, Israel, and dated to about 600 BC. A new analysis suggests that literacy may have been more widespread than previously known in the Holy Land at this time. The findings could influence a debate about when the main body of biblical texts was composed. Photograph: Michael Cordonsky/Israel Antiquities Authority via the New York Times

Eliashib, the quartermaster of the remote desert fortress, received his instructions in writing – notes inscribed in ink on pottery asking for provisions to be sent to forces in the ancient kingdom of Judah. The requests for wine, flour and oil read like mundane, if ancient, shopping lists.

But a new analysis of the handwriting suggests that literacy may have been far more widespread than previously known in the Holy Land around 600 BC, toward the end of the First Temple period. The findings, according to the researchers from Tel Aviv University, could have some bearing on a century-old debate about when the main body of biblical texts was composed.

“To Eliashib: And now, give the Kittiyim 3 baths of wine, and write the name of the day,” read one of the texts, composed in ancient Hebrew using the Aramaic alphabet, and apparently referring to a Greek mercenary unit in the area. Another said: “And a full homer of wine, bring tomorrow; don’t be late. And if there is vinegar, give it to them.”

The new study, published on Monday in the Proceedings of the National Academy of Sciences, combined archaeology, Jewish history and applied mathematics, and involved computerised image processing and the development of an algorithm to distinguish between the various authors issuing the commands.

Based on a statistical analysis of the results, and taking into account the content of the texts that were chosen for the sample, the researchers concluded that at least six hands had written the 18 missives at around the same time. Even soldiers in the lower ranks of the Judahite army, it appears, could read and write.

“There is something psychological beyond the statistics,” said professor Israel Finkelstein of the Department of Archaeology and Ancient Near Eastern Civilizations at Tel Aviv University, one of the leaders of the project. “There is an understanding of the power of literacy. And they wrote well, with hardly any mistakes.”

That was shortly before Nebuchadnezzar’s destruction of Jerusalem and the kingdom of Judah, and the exile of its elite to Babylon – and before many scholars believe the major part of the biblical texts, including the five books of Moses, also known as the Pentateuch, were written down in any cohesive form.

The Arad citadel was small, far-flung and on an active front, close to the border with the rival kingdom of Edom. The fort itself was only about half an acre in size, and probably would have accommodated about 30 soldiers. The wealth of texts found there, recording troop movements, provisions and other daily activities, were created within a short time, making them a valuable sample for looking at how many different hands wrote them.

“To Eliashib, and now: Issue from the wine 3 baths,” another ostracon ordered, adding, “And Hananyahu has commanded you to Beersheba with 2 donkeys’ load and you shall wrap up the dough with them.”

One of the long-standing arguments for why the main body of biblical literature was not written down in anything like its present form until after the destruction and exile of 586 BC is that before then there was not enough literacy or enough scribes to support such a huge undertaking.

But if the literacy rates in the Arad fortress were repeated across the kingdom of Judah, which had about 100,000 people, there would have been hundreds of literate people, the Tel Aviv research team suggests. That could have provided the infrastructure for the composition of biblical works that constitute the basis of Judahite history and theology including early versions of the books of Deuteronomy to 2 Kings, according to the researchers.

In the centuries after the destruction and exile, up until 200 BC, Finkelstein said, there is almost no archaeological evidence of inscriptions in Hebrew. He said he would have expected digs to reveal seal impressions and everyday writings on pottery, even if more important texts, like biblical ones, had been done on perishable materials such as parchment or papyrus.

Biblical texts written in the centuries after 586 BC, he suggested, were likely to have been composed in Babylon. Other scholars cautioned against drawing too many conclusions about when the first major part of the Bible was written based on extrapolations regarding ancient literacy rates.

“There is no such thing as consensus in biblical studies these days,” said professor Edward Greenstein of Bar-Ilan University near Tel Aviv. “The process of transmission was much more complicated than scholars used to think.” The process of composing the Torah, according to Greenstein, appears to have involved layers of rewrites, supplements and revisions. Pointing to recent scholarship on biblical literature, he said that scribes may have recorded texts primarily as a memory aid in a world where they were still being transmitted orally.