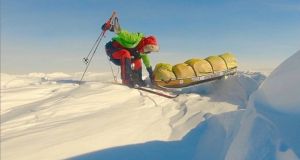 Colin O’Brady on day 30 of his trip across Antarctica, on December 2nd, 2018. Photograph: Colin O’Brady via The New York Times

The final kilometres of a nearly two-month race across Antarctica ended on Wednesday with a sprint to the finish.

In an effort that could go down as one of the great feats in polar history, American Colin O’Brady (33) covered the final 125km of his 1,482km journey across Antarctica in one last 32-hour burst, without sleeping a wink.

In doing so, he became the first person ever to traverse Antarctica from coast to coast solo, unsupported, and unaided by wind.

O’Brady’s feat was remarkable enough, but to complete the final 125km in one shot – essentially tacking an ultramarathon onto the 53rd day of an already unprecedented journey – set an even higher bar for anyone who tries to surpass it.

In the nearly two months racing on his own, O’Brady took only one half-day off: on November 29th, he lost a skin from his ski and was forced to set up camp early, reglue his skin and lick his wounds.

O’Brady’s culminating effort joined some of the most remarkable feats in polar history, including expeditions led by Norway’s Roald Amundsen and by Robert Falcon Scott of England, who battled Amundsen to become the first to reach the magnetic South Pole. There was also Borge Ousland’s magnificent traverse in 1996-97, when he became the first to cross the continent alone, aided by kites.

Since then, at least three others have tried to duplicate Ousland’s feat without kites, raising the stakes and trimming the margin for error several degrees. O’Brady has become the first to succeed.

As of Wednesday, English man Louis Rudd (49) was still on the ice.

Rudd has raced O’Brady from the Messner Start on the Ronne Ice Shelf to the Ross Ice Shelf at the foot of Leverett Glacier, since the pair departed the Antarctic Logistics and Expeditions base camp at Union Glacier on November 3rd. – New York Times