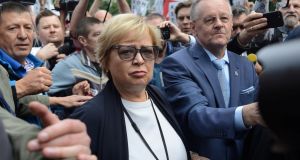 Poland’s supreme court president was targeted as part of a campaign, allegedly masterminded by the country’s justice ministry, to bully and discredit opponents to controversial court reforms.

Prof Malgorzata Gersdorf has confirmed she received postcards with obscene messages during her standoff last year with the government over her forced retirement. Only now has it emerged that they were allegedly sent by judges loyal to the ruling Law and Justice (PiS) party.

According to Polish news portal Onet, members of an online WhatsApp group discussed ways to intimidate judges who were critical of the government’s reforms.

Konrad Wytrykowski, a judge recently appointed to the supreme court’s disciplinary branch, has denied a report that he was a member of the online group and that the idea of vulgar postcards for Prof Gersdorf originated with him.

“There was never such a situation, it’s nonsense,” he said.

Prof Gersdorf said she had destroyed at least three vulgar postcards and that, despite her “thick skin”, revelations of a concerted campaign against her had left her “shaken, to put it mildly”.

“I am horrified, there has been enormous hatred towards me,” she said. “If it’s true that this was an idea of a current judge on the disciplinary chamber of the supreme court, that would be terrible.”

Another reported member of the WhatsApp group was former deputy justice minister Lukasz Piebiak. He resigned this week after Onet claimed he had co-operated with an online troll to attack judges and lawyers opposed to the government’s controversial judicial reform programme, launched after it took office in 2015.

Mr Piebiak, who is still serving as a regional judge, allegedly discussed with a woman identified as “Emilia” a plan to discredit and blackmail Krystian Markiewicz, a judge, law professor and reform critic, with a dossier of unsubstantiated allegations.

According to Onet, the dossier was distributed to more than 2,000 people associated with Iustitia, a group opposed to judicial reforms. Mr Piebiak also reportedly gave Prof Markiewicz’s private address to Emilia.

Other exchanges about extra-marital affairs found their way on to government-controlled state television in May 2018.

Asked by Emilia if he approved of the result, Mr Piebiak reportedly replied: “Great, I am just sending it to the boss, to make him happy.”

His boss, justice minister Zbigniew Ziobro, has denied any knowledge of his deputy’s alleged trolling operation.

“As soon as I obtained information that judges employed in the justice ministry could be violating standards I took the decision to remove them,” said Mr Ziobro. “This kind of behaviour is not acceptable.”

Political opponents are sceptical of Mr Ziobro’s claims of ignorance. After taking office in 2015 he centralised operations around himself, with parliament backing the merger of chief prosecutor with his own ministerial role.

Grzegorz Schetyna, leader of the opposition Civic Platform, has said that unless this merger is reversed, the investigation of the trolling affair will be a farce.

“It can’t be that the justice minister, a party politician, is using the prosecutor’s office to realise party politics,” he said. “There is an absurd situation that prosecutor general Zbigniew Ziobro is going to be a judge in his own case.”

The affair has increased pressure on the ruling PiS party ahead of autumn elections. Its judicial reforms were a political priority since securing an absolute majority in 2015. The trolling operation now revealed ran in parallel to an unprecedented hate campaign against judges in PiS-friendly newspapers and state-controlled public broadcaster TVP.

The government said its judicial reforms were essential to remove encrusted crony structures from the judiciary; critics say it was a political takeover of the courts.

After a four-year standoff with the European Commission, Warsaw reversed its law introducing a retirement age for judges of 60 for women and 65 for men. In June, the Court of Justice of the European Union struck down the regulation as contrary to EU law because it “undermines the principle of the irremovability of judges, which is essential to their independence”.

Warsaw now has the choice to roll back its other judiciary reforms and comply with the ruling or risk further legal action from the European Commission.