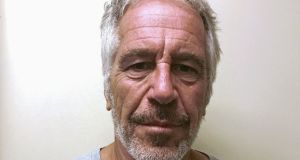 US financier Jeffrey Epstein was arrested in July, on charges of sex trafficking involving dozens of underage girls as young as 14. File photograph: New York State Division of Criminal Justice Services/Handout via Reuters

France has opened a preliminary inquiry to see if late US financier Jeffrey Epstein committed any sex crimes on French territory or against any underage French victims, the Paris public prosecutor said on Friday.

Epstein was arrested on July 6th in New Jersey after his private jet landed on a flight from Paris, where he had a residence on Avenue Foch, one of the capital’s most exclusive addresses in the 16th District near the Arc de Triomphe.

Epstein died on August 10th in his jail cell at the age of 66, and an autopsy report released this month concluded he had died by suicide. US attorney general William Barr has said that the criminal investigation into any possible co-conspirators of Epstein would continue.

Earlier this month, French gender equality minister Marlène Schiappa had called for an investigation, while a French child-protection group had also said it had written to the Paris public prosecutor.

Epstein had been convicted in 2008 in the US of sex with a minor. He was later released but was again arrested in July, pleading not guilty to charges of sex trafficking involving dozens of underage girls as young as 14. – Reuters