Colombian author won the Nobel Prize for Literature and popularised the genre of magical realism. Here are some important dates in his life and career 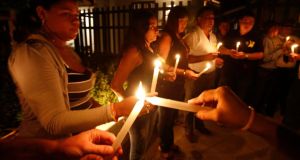 Residents light candles as they pay homage in front of the house of Colombian Nobel Prize laureate Gabriel Garcia Marquez in Aracataca. Garcia Marquez, the Colombian author whose beguiling stories of love and longing brought Latin America to life for millions of readers and put magical realism on the literary map, died on Thursday. He was 87. Photograph: John Vizcaino/Reuters

1927 - Garcia Marquez is born on March 6 in Aracataca, a backwater banana-growing town near Colombia’s Caribbean coast. The oldest child of a large family, he spends part of his childhood living with his grandparents and is especially close to his grandfather, a retired army man who inspired the novel No One Writes to the Colonel.

1940 - Garcia Marquez moves to Barranquilla, a port city famous for its Carnival, to start high school.

1947 - He studies law at the National University in the Colombian capital Bogota and has two short stories published in the El Espectador newspaper.

1948-1950 - After riots force the National University to close and Garcia Marquez returns to Barranquilla, where he works as a reporter and starts writing his first novel, Leaf Storm.

1954 - Garcia Marquez works for El Espectador. His tale about a Colombian sailor who survived a high-seas shipwreck, published in installments, causes controversy in Colombia.

1955-1957 - Leaf Storm is published. He lives in Paris, publishing essays about his travels in communist eastern Europe.

1958 - Garcia Marquez marries Mercedes Barcha in Barranquilla. They remain married for the rest of his life.

1960-1961 - Garcia Marquez lives in Cuba for a short time, before moving the family to Mexico where he rubs shoulders with the country’s literati, including author Carlos Fuentes. No one Writes to the Colonel is published.

1967 - One Hundred Years of Solitude is published in June, earning Garcia Marquez recognition and accolades around the world. The family moves to Spain, staying until 1975.

1975-1976 - Autumn of the Patriarch, inspired by various Latin American dictators, is published. Garcia Marquez is punched in the face by Peruvian author Mario Vargas Llosa in a dispute that triggers endless speculation over why they fell out.

1979-1981 - He divides his time between Colombia and Mexico. During a trip to Europe, he meets Pope John Paul II. He begins work on “Chronicle of a Death Foretold.”

1983-1987 - Love in the Time of Cholera is published, Chronicle of a Death Foretold is made into a film.

1989 - The General in his Labyrinth, about the final days of South American independence leader Simon Bolivar, is published.

1996 - News of a Kidnapping, a non-fiction account of the kidnapping of several prominent figures in Colombia by drug lord Pablo Escobar is published.

2002-2004 - He publishes his memoir Living to Tell the Tale in 2002. Two years later, Memories of My Melancholy Whores is released to mixed reviews.

2010-2012 - Garcia Marquez’s editor says he is working on a new novel, titled We’ll See Each Other in August. A younger brother, Jaime, says that the author is suffering from dementia and can no longer write.

2014 - Garcia Marquez dies at his home in Mexico City.