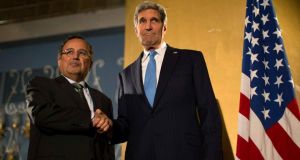 US secretary of state John Kerry has met his Egyptian counterpart in Cairo and said Egypt was a “vital partner” that Washington was committed to working with.

Mr Kerry, the most senior US official to visit Egypt since the army overthrew Islamist president Mohamed Morsi in July, stressed the need for fair and transparent trials for all Egyptians.

Mr Kerry’s visit comes a day before Mr Morsi and 14 other senior Muslim Brotherhood leaders were due to go on trial charged with inciting violence.

At a joint news conference following a meeting with Egyptian foreign minister Nabil Fahmy, Mr Kerry said that the suspension of aid to Egypt is not a punishment but a legal requirement after the Egyptian military in July toppled the democratically elected government.

Mr Kerry said the topic was mentioned only briefly in his meeting with Mr Fahmy and that he believed Egyptian authorities understood that rationale.

While acknowledging that Egypt had faced “difficult challenges” and “turbulent years,” including in its relationship with the US, he urged Egyptians to continue their “march to democracy”. The US is a friend and partner to the Egyptian people and wants to contribute to the country’s success, Mr Kerry said.

Mr Fahmy said Mr Kerry’s comments and the roadmap Egypt’s military chief General Abdel-Fattah el-Sissi laid out following the military coup indicate that “we are all pursuing a resumption of normal relations”.

The roadmap includes amending the Islamist-tilted constitution adopted under Morsi last year, holding a national referendum before the end of the year and parliamentary and presidential elections by the spring of 2014.

The US State Department apparently expected a frosty reception for Mr Kerry, especially with tensions running high on the eve of tomorrow’s scheduled start of Mr Morsi’s trial on charges of inciting murder. The department refused to confirm Mr Kerry’s visit until he landed in Cairo, even though Egypt’s official news agency reported the impending trip three days earlier.

The secrecy was unprecedented for a secretary of state’s travel to Egypt, for decades one of the closest US allies in the Arab world, and highlighted the deep rifts today between Washington and Cairo.

Mr Kerry last was in Egypt in March, when he urged Mr Morsi and his Muslim Brotherhood-backed government to enact sweeping economic reforms and govern in a more inclusive manner. Those calls went unheeded. Simmering public unhappiness with his rule boiled over when the powerful Egyptian military deposed Morsi on July 3rd and established an interim government.

The Obama administration was undecided over whether to condemn the ouster as a coup and cut the annual $1.3 billion in US military assistance that such a determination would legally require.

The US prevaricated for months before deciding last month to suspend most big-ticket military aid such as tanks, helicopters and fighter jets, while declining to make a coup determination. The US also is withholding 260 million dollars in budget support to the government.

Egypt is receiving billions of dollars in aid from wealthy Gulf Arab states such as Saudi Arabia and the United Arab Emirates. But Egyptian authorities reacted angrily to the US aid suspension, declaring it a new low point in ties that have been strained since the popular revolt that unseated authoritarian leader Hosni Mubarak in February 2011.

Egypt’s foreign minister, Nabil Fahmy, said last month that US-Egyptian relations were in “turmoil” and warned that the strain could affect the entire Middle East.

In meetings with Egypt’s Army chief, Abdel Fattah al-Sisi, the interim president, Adly Mansour, and Fahmy, Mr Kerry intends to underscore the necessity of democratic transition through a transparent and inclusive constitutional process, and free and fair parliamentary and presidential elections.

Only once progress is made on those, American officials say, will the US consider restoring the suspended aid. They say Mr Kerry is eager to assure Egyptians that the US considers Egypt an important friend and bulwark of regional stability, notably because of its peace treaty with Israel.

US officials travelling with Mr Kerry said he also would stress the importance of human rights, particularly freedom of the press and assembly, and the role of civic leaders in ensuring a pluralistic society.