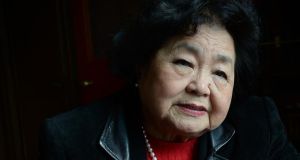 Setsuko Thurlow Hiroshima a survivor at the RIA where she attended a conference on disarmament organised by the Department of Foreign Affairs and Trade. Photograph: Brenda Fitzsimons


She was 13 when the world ended. There in Hiroshima on that bright blue morning of August 6th, 1945, 70 years ago next year, when all changed utterly. She survived to relate what it is to live through annihilation.

Setsuko Thurlow is 82, a mother of two and a grandmother of two. Last week she was at the Royal Irish Academy in Dublin for a conference organised by the Department of Foreign Affairs, UCC’s history department and the Japanese embassy. Its theme was: disarmament and non-proliferation – historical perspectives and future objectives.

Minister of State Joe Costello said the conference was “extremely privileged” to have her in attendance, to hear what a nuclear explosion “means in terms of human suffering”. Such“narrative offers a basis for reframing the entire nuclear disarmament debate,” he said.


Silence
She was on the second floor of a wooden building “about a mile from ground zero [over which the bomb exploded],” she said, when at 8.15am she saw “a blinding, bluish-white flash”. She remembers “the sensation of floating in air”. She was lifted by the blast and lost consciousness. When she came to, it was in “total silence and darkness. No screaming.” She was pinned down. The building had collapsed.

She heard classmates, cry out “I’m here, help me”, “God, help me”, She felt hands touching her and lifting material off her. A man said: “See the light coming through? Crawl towards it.” When she got out, the ruined building was on fire. Most of her classmates were burned alive. Just she and two others survived. A solider ordered them to nearby hills.

It looked like twilight because of the dust and smoke. She did not see the bomb’s mushroom cloud because she was in its fallout. All was “deadly silence broken only by the groans of the injured,”she said.

“Streams of stunned people were slowly shuffling from the city centre toward nearby hills. They were naked or tattered, burned, blackened and swollen. Eyes were swollen shut and some had eyeballs hanging out of their sockets.

“They were bleeding, ghostly figures. Many held their hands above their hearts to lessen the throbbing pain of their burns. Strips of skin and flesh hung from their bones. Often these ghostly figures would collapse in heaps, never to rise again.”

She joined the procession to the hills, stepping over dead and dying.

“We went to a nearby stream to wash the blood and dirt from our bodies. Then we tore off parts of our clothes, soaked them with water and hurried back to hold them to the mouths of the dying who desperately sucked the moisture.”

There was no medical help. All the city’s hospitals had been destroyed.


Numbed
“As darkness fell we sat on the hillside, numbed by the massive scale of death and suffering we had witnessed, watching the entire city burn,” she said.

The next day she was found by her father and mother. He had been away fishing, so missed the explosion. Their house had been flattened.

“My sister and her four-year- old son were crossing a bridge at the moment of the explosion and both were horribly burned, blackened and swollen beyond recognition. We could later recognise my sister only by her voice and by a unique hairpin in her hair.” They lingered for days, then died.

Then there was the radiation. “My favourite uncle and aunt were in the suburbs and had no external injuries. But a couple of weeks later they began feeling sick, with purple spots on their bodies, nausea and loss of hair. We did not know then that the sickness was due to radiation.”

Her mother said “their internal organs seemed to be rotting and dissolving and coming out in a black liquid. Later we were told that if purple spots appeared on our bodies, this was a sure sign that we would soon die. Every morning, our routine was anxiously to examine our bodies for the dreaded purple spots.”

She and her family went to live with relatives outside Hiroshima. Some years later she met her husband, a Canadian who taught English in Japan. She has spent most of her adult life in Toronto.

An inscription on the cenotaph of Hiroshima’s peace park reads: “Rest in peace; the mistake will not be repeated.” She is, she said, “committed to share the warning of Hiroshima until my last breath”.