Governments of left continue to hold sway in South America 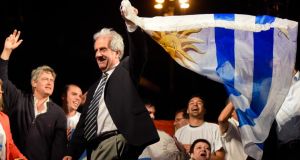 Tabaré Vázquez waves a Uruguayan flag to celebrate his victory in the country’s presidential election. His victory follows those in recent weeks for fellow leftists Evo Morales in Bolivia and Dilma Rousseff in Brazil. Photograph: Matilde Campodonico/AP

Sunday’s comfortable victory for the ruling Broad Front movement in Uruguay was the latest confirmation of the enduring appeal of left-wing rule in South America over a decade after the so-called pink-tide first washed over the continent.

Tabaré Vázquez swept past his right-wing challenger to return to the presidency a decade after he led the left into power in South America’s second smallest republic for the first time, securing the front a third consecutive term in office along the way. His 12-point margin of victory over his right-wing challenger was electoral reward for his movement’s successful management of the economy and social policies that have driven down poverty rates during its 10 years in power.

Although one of the more spectacular performers in the region during the last decade, events in Uruguay mirror those elsewhere in the region where high prices for agricultural and mineral exports have allowed governments to fund social programmes that tackle the continent’s entrenched poverty and inequality. Vázquez’s victory follows those in recent weeks for fellow leftists Evo Morales in Bolivia and Dilma Rousseff in Brazil.

The Bolivian president won a third consecutive term at the head of his Movement Towards Socialism party while Rousseff’s re-election to a second term saw her ruling Workers Party set for 16 uninterrupted years in power.

This latest wave of victories follows triumphs last year for left-wing candidates in Chile, Ecuador and Venezuela. There are clouds on the horizon though. The cycle of strong growth driven by commodity exports that serendipitously took off with the left’s arrival in power is tapering out as voracious Chinese demand eases.

According to the International Monetary Fund, Latin America and the Caribbean will grow by just 1.3 per cent this year, the second smallest expansion in 12 years. Although he predicted a small pick-up next year, Alejandro Werner, the IMF’s western hemisphere director, warned “a sharper slowdown in China remains a key risk” for the region’s commodity exporters.

This economic slowdown and the end of quantitative easing in the US will make it harder to attract foreign investment, forcing governments to make greater efforts to tackle the obstacles to greater productivity.

Although some progress has been made in the last decade, the region’s education systems, infrastructure, tax and legal systems remain barriers to lessening economic dependence on commodity exports by developing more value-added sectors.

The changing environment will be particularly challenging for some of the region’s more profligate leftist governments.

In Argentina, the populism of the Kirchner administration has deepened the country’s economic isolation at a time when the price of soybeans, the country’s main cash earner, is sliding. The economy is already in recession while inflation is set to end the year somewhere about 40 per cent as the government resorts to printing money to pay for spending.

Already prevented by term limits from standing for a third term in elections next year, President Cristina Kirchner’s chances of installing a handpicked successor are being undermined by a criminal investigation into her family’s hotel business, which has refocused attention on rampant corruption within her circle.

With the possibility of several candidates running from her fractious Peronist movement, the right-wing mayor of Buenos Aires Mauricio Macri hopes a split in the country’s biggest political movement could open a path for him to the Casa Rosada.

Meanwhile in Venezuela, the economic mismanagement of President Nicolás Maduro has forced the country to renegotiate its huge debts with China, which lent the populist regime tens of billions of dollars in return for guaranteed oil supplies.

However even after repayment terms were eased by Beijing, the economy remains under pressure due to the fall in the price of oil in recent months, which leaves a large funding gap for an administration almost wholly dependent on crude exports for income.

Despite sitting on the world’s largest oil reserves, Venezuela was already plagued by rampant inflation and shortages of many basics goods even when prices were high.

The government in Caracas had been desperate to reverse the recent slide and was a major advocate of a production cut by the Opec cartel. Its failure to achieve one and the domestic economic chaos has left many market watchers debating if Caracas might default on its foreign bonds in 2015.