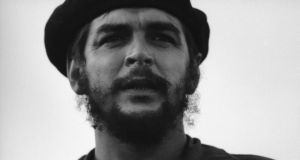 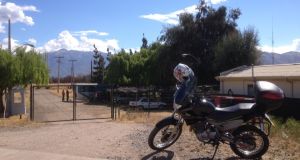 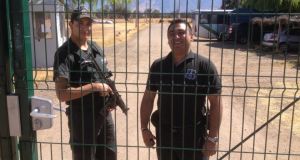 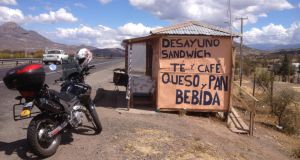 More reliable than Che’s Norton 500: Peter Murtagh’s rented Honda Falcon 400 and the Andes in the background. 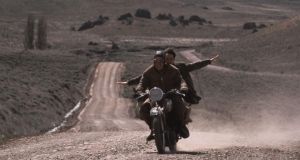 When Che Guevara went pillion with his pal Alberto Granado on their now legendary motorcycle tour of South America, they spawned a cadre of enthusiastic imitators.

It was inevitable, I guess, that one day my turn would come.

Che (of course he wasn’t called that when he and Alberto set off from Buenos Aires in January 1952 astride Alberto’s rather dodgy Norton 500; that nickname was bestowed later by the Cubans) crossed the Andes from Argentina and entered Chile by what appears to be a wonderfully scenic route – boat rides across several small mountain lakes from Puerto Blest in Argentina (“the pompously named Puerto Blest,” as Che put it) to Petrohué in Chile.

This confluence was rather fortunate for Che and Alberto, because thereafter, The Motorcycle Diaries was actually an account of hitch-hiking on trucks north to Santiago and then stowing away on a ship from Valparaiso up the coast to the Atacama Desert, and from there more hitching to Peru, Colombia, Venezuela, Miami and back again to Argentina.

Bustling
Santiago de Chile is today a big, bustling, vibrant capital city, a place of gleaming, glass-facade buildings, among them Latin America’s highest, the Costanera Centre, standing 300 earthquake-defying metres tall. The city is home to about six million of Chile’s population of 16 million.

When Che and Alberto arrived on March 1st, 1952 (yes, it took them two months to get there), the city had about 1.5 million residents.

In his book, the only place in Santiago that Che mentions visiting is the Cerro Santa Lucía, the spot where, on February 12th, 1541, Pedro de Valdivia founded the city.

Today Santa Lucía is a national monument, a stunningly beautiful city centre park, the centrepiece of which is a 70-metre high rock outcrop (it is actually the remains of a defunct volcano). It is a warren of stairways and passages, fountains and statues, flower beds and trees, and benches and lawns strewn on a sunny day with courting couples. And all topped off with a castle.

Down below, the city whizzes along fat, multi-laned highways (one of them named, inevitably, Bernardo O’Higgins) but it remains a pool of calm, notwithstanding the wow factor of the enormous, over-the-top, baroque cascading fountain of Neptune at the main entrance.

Charles Darwin had a soft spot for Santa Lucía, who is, ironically, patron saint of the blind. In 1831, Darwin climbed Santa Lucía and marvelled at the panoramic views it afforded across the city and to the rear, looking up at the snow-capped Andes, the breathtaking backdrop to Santiago. “Certainly most striking,” he noted.

Che, however, was evidently unmoved. “The following day,” he wrote (that would be the day after trying to navigate the idiocies of Argentine and Peruvian diplomacy to obtain visas and also get a garage to mend the hopeless Mighty One), “we climbed up Santa Lucía, a rocky formation in the centre of the city with its own particular history. . .”

That’s it. No wonderful view or fabulous architecture. Nothing about Darwin or the statues and fountains. Just mention of an Argentine water polo team and some “good-lookers” hanging on to them. And then it was off by truck to Valparaiso where, to be fair, Che was struck by the “madhouse beauty of its strange corrugated-iron architecture, arranged on a series of tiers linked by winding flights of stairs and funiculars”.

Magical
Just so. Valparaiso is truly a wonder – a magical city that burst into life as Chile’s major port in the 19th century and is now a Unesco World Heritage Site.

The city is like an amphitheatre facing the sea. The two Unesco barrios are the hillocks of Concepcion and Alegre, the creation mainly of immigrants from Britain, Germany and Croatia – and of course Chileans too – many of whom made themselves fabulously wealthy trading Chile’s mineral wealth, much of it shipped up the west coast of the Americas to help fuel the California gold rush.

Today, their physical legacy is a warren of up-and-down streets, corrugated-iron homes, the best maintained in vibrant colours but many spoiled, unloved and covered with graffiti. But Concepcion and Alegre are fighting back: the number of hotels, hostels and chi-chi restaurants is growing.

In 1952, Che noted the swarms of beggars and the stench of the place. “Our distended nostrils inhale the poverty with sadistic intensity.”

And then it was off, a stowaway to Antofagasta and then inland to Chuquicamata, the vast open cast copper mine (the largest in the world today) where he was horrified at the conditions of the miners.

Today, at least the mine is in public ownership but it accounts for an unhealthy proportion of Chile’s foreign earnings – $42 billion, exactly 10 times greater than its nearest rival, fruit.

My own Chilean motorcycle journey involved a rented Honda Falcon 400 (in fine fettle unlike the hapless Norton) that took me from Santiago up into the Andes. Coming back down from Los Andes, the first significant town on the road from Mendoza in Argentina, one did not have to wait long to witness the sort of disparity in wealth that fired Che.

Living on river beds
Clusters of shanties cling to the side of roads and, bizarrely, occasionally on boulder-strewn dry river beds – presumably because such land belongs to no one and therefore the occupants are left alone, at least until a torrent arrives.

On Route 5, the big highway linking Santiago to northern Chile, a young woman looks out from a shack, advertising tea, cheese and bread, as she tries to catch a driver’s attention by waving a white plastic bag attached to a stick.

I stop and dismount. She smiles. Her English is as non-existent as my Spanish but the word “tea” crosses the language barrier. She hurries out the back of the shack, down a dusty bank and into another shack, her home. It is one of several – all homes to families, people with hopes and dreams like everyone else, but past whom the world literally whizzes by.

The young woman – she might be 20 and is heavily pregnant – emerges with a flask of hot water and a minute later, I am holding a mug of tea as she peels back layers of cloth keeping warm a freshly baked basket of bread rolls.

I pay her several times more than the asking price (pennies to me, I hope more significant to her) and head south to review another representation of contemporary Chile – Punta Peuco.

There is a wine-growing valley about 35km out of Santiago along Route 5, not far from a town named Til Til. There are no signs to direct you but questions to roadside workers about los politicos eventually brings one to the Centro Metropolitano Norte, a civilian prison in the middle of a dusty nowhere.

Los politicos
Beside the jail is the special prison for los politicos, the jailed human rights abusers from the Pinochet era, purpose-built in 1995. Behind wire fencing with no sign and screened by trees, the buildings have tennis courts, wifi access and suites with bathrooms – a five-star slammer compared to what the ordinary decent criminals get next door.

Last month the government announced the closure of a second similar facility, Penal Cordillera, and the transfer of its junta-era inmates to Punta Peuco. One who was on weekend release, 87-year-old former general Odlanier Mena, a death squad hard man for Pinochet, blew his brains out rather than move to Punta Peuco.

The armed guards on duty when I arrive at Punta Pueco are smiling and relaxed. I show my press card and communicate a desire to enter. This cracks them up, the younger one with the machine gun finding my request particularly hilarious.

After some back- and knee-slapping, the answer is a polite “No” but they are happy to have their photo taken.

No one in Chile pays much attention these days to los politicos. It seemed to me they were for most people an embarrassment, a leftover from an era of shame. A common refrain was that the Chilean economy, thriving more than most in South America, was begun under Pinochet but almost everyone agrees that the price for this success – in terms of democracy, the rule of law and human rights – was far too high.

On November 17th Chileans will choose a president between centre-left alliance candidate Michelle Bachelet of the Socialist Party and a number of rivals, the most serious being Evelyn Matthei of the centre-right.

Bachelet is likely to win, if not outright then in the run-offs. She promises to do something about the wealth gap in Chile, which might help the young woman selling tea from a roadside shanty on Route 5 and hopefully won’t have others yearning for a return of the Punta Peuco inmates.