After president and government vanish, opposition and protesters take control 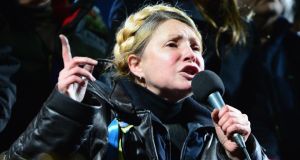 
Over a historic 24 hours, Ukraine’s protesters turned their country on its head.

On Friday night, Viktor Yanukovich fled the presidency and Kiev, along with his ministers, family and entourage. The next day, he said he was in the eastern city of Kharkiv, an erstwhile stronghold where in 2011 he jailed his political nemesis, Yulia Tymoshenko. By the time his video message appeared, parliament had voted to free Ms Tymoshenko and she was preparing to finally escape Kharkiv and make a triumphant return to the capital that same evening. She is favourite to become Ukraine’s next president in elections set for May 25th.


Isolated
The spectacular reversal of fortunes brought considerable humiliation for Mr Yanukovich, a proud man with a fierce temper. In a rambling video address, he compared events in Ukraine to the Nazis’ rise to power in 1930s Germany, denounced a “coup” by “gangsters” and refused to step down. He looked isolated and out of touch. Shortly afterwards, he was sacked by a parliament he had controlled until Friday.

On Saturday night, border guards reported that they stopped Mr Yanukovich flying out of an airport in his home region of Donetsk. Last night, his whereabouts were still unknown. His ministers were also on the run and some had tried in vain to flee abroad. Some protesters watched Mr Yanukovich’s stilted video performance from the comfort of what was, until Saturday morning, his own home.


Interim cabinet
They took over his 140-hectare estate outside Kiev without resistance, and threw open its grand gates to thousands of people who craved a look at a vast monument to folly and corruption, largely paid for, they suspect, with their own tax money.

Parliament yesterday voted to return the property to the state, one of a series of moves over the weekend to sweep away many vestiges of Mr Yanukovich’s four-year rule. An interim cabinet is being formed, a new chief of the armed forces is in place, and activists’ “self-defence” groups are working with police to ensure security in Kiev and other cities across western and central Ukraine.

In eastern Ukraine and Crimea, officials have vowed to resist the revolution and opposing groups of protesters have clashed in the streets, often over control of administration buildings and around statues of Vladimir Lenin, which have been toppled across the country as symbols of the Moscow-dominated past.

Protesters took control of central Kiev late on Friday when, without any warning, Mr Yanukovich and his ministers disappeared from view and riot police withdrew and left protesters to occupy the area.

“He was driven away at about 6pm. There was nothing unusual and he didn’t say that he wasn’t coming back,” Col Nikolai Kolodyazhny, deputy head of the presidential security service, told The Irish Times .

Thousands of people wandered through Kiev over the weekend, celebrating what many consider a great victory over a leader who was increasingly authoritarian, and enjoying the absence of police lines and blockades from a city rocked by three months of protests.

The occasionally bloody stand-off erupted into extreme violence last week, when at least 82 people were killed and more than 600 injured in Kiev. The vast majority of casualties were protesters struck by gunfire from snipers and other members of the security forces.

On Friday, EU foreign ministers brokered a compromise deal to end the crisis, but it was quickly rejected by many activists who refused to end protests until Mr Yanukovich stepped down. Some vowed to use force to oust him unless he resigned.


‘Heroes’
With Mr Yanukovich missing on Saturday, and deputies deserting his Regions Party, parliament removed him and freed Ms Tymoshenko. Using a wheelchair due to back problems, supporters cheered as she emerged from confinement in a Kharkiv hospital and flew to Kiev on a private jet. Her first stop in the city was a shrine of flowers and candles for protesters killed during the fighting.

“You are heroes, you are Ukraine’s finest,” she said of the dead. Addressing a packed Independence Square, known locally as Maidan, Ms Tymoshenko told people not to end their protest until all their demands for a political overhaul of the country were met: “You do not have the right to leave the Maidan until you achieve everything you planned to do.” There were some whistles in the crowd, however, underscoring how the protests have been led by activists rather than parties, and how many Ukrainians are utterly disillusioned with all their politicians. As she was driven out of Kiev airport, protesters blocked her car and one said: “Please remember this is a revolution. Please be with the people.”

“I will. That is the most important thing,” Ms Tymoshenko replied. “Glory to Ukraine.”