Yanis Varoufakis: why the brash Greek finance minister had to go

The Greek Finance Minister refuses to comment as leaves home for the finance ministry after resigning his post. Video: Reuters 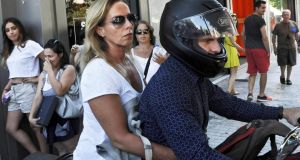 When historians look back at the great Greek debt crisis, the figure of Yanis Varoufakis will feature large. Bold and brash, he did more to internationalise the folly of austerity politics than any other member of the radical left government of Athens.

Alexis Tsipras, the young prime minister, was much indebted to him, and Varoufakis’s resignation was quickly followed by effusive praise. “The prime minister feels the need to thank him for his ceaseless effort to promote the positions of the government and the interests of the Greek people under very difficult circumstances,” government spokesman Gavriel Sakellaridis announced.

Varoufakis may have been forced to leave front-line politics, but he does so hugely vindicated by the historic no vote delivered by Greeks on Sunday.

There are not a few in Athens today who believe he is also a victim of his own success. The resounding rejection of further belt-tightening in a referendum that pitted Greece against all its eurozone partners was a high-stakes gamble associated squarely with the 54-year-old’s penchant for game theory and buccaneering style. The morning after, he had to go.

In announcing his resignation, the controversial finance ministerrecognised that of all the impediments to a prospective deal (and there are still many) he would be the biggest.

Even by the standards of a crisis that long ago dispensed with diplomatic niceties, the combative politician had pushed the boundaries of acceptable fighting talk too far. On the eve of the vote, he accused Europe of indulging in terrorism, saying it was instilling fear in people in its bid to get Greece to acquiesce to “neoliberal dogmas.”

Elected with the more votes than any other lawmaker in Greece’s new parliament, Varoufakis announced in his blog that he had got the finance post, even before a cabinet was appointed by Prime Minister Alexis Tsipras.

“Naturally, my blog posts will become more infrequent and shorter,” he wrote. “But I do hope they compensate with juicier views, comments and insights.”

In April, when eurozone counterparts expressed exasperation at his hectoring and lecturing style after an especially explosive eurogroup, Varoufakis had felt fit to announce : “They are unanimous in their hate for me - and I welcome their hatred.”

By June, when it became apparent that Varoufakis would take things to the brink, senior Greek government officials in Athens were also finding it hard to contain their consternation.

Many were enraged by tactics they saw as deliberately confrontational and a danger to the country’s relationship with Europe.

Varoufakis’s showy lifestyle and shameless narcissism also jarred. But his apparent endorsement of a parallel currency and IOUs appears to have been the straw that broke the camel’s back. His ability to represent Greece abroad was over.

Ever the maverick, Varoufakis is unlikely to vanish overnight. Although never a member of the ruling Syriza party, he remains an MP and, very possibly, will continue to influence Tsipras behind the scenes. There are few who doubt he will also be working on an unexpurgated version of the euro crisis, Varoufakis style.

He has already said he is looking forward to life on the backbenches. But will his sacrifice be enough to placate creditors? Varoufakis leaves an economy in meltdown, banks closed, capital controls imposed and shortages growing by the hour.

If his removal is not enough, the mess that has also been the price of his brinkmanship may well end up being his lasting legacy - a legacy that historians will not forget.