What is the debate on EU debt flexibility about? 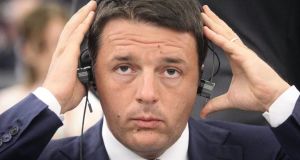 What does Italian prime minister Matteo Renzi want? Greater flexibility on EU debt rules. Rome has been advocating for some time that certain categories of investment should be excluded from deficit targets.

Italy’s main problem is its debt-to-GDP ratio, which is one of the highest within the EU.

Haven’t we been here before? True: recent years are littered with efforts to break the reform-first, investment-later policies backed by Berlin.

French president François Hollande took office with a mandate to end austerity and to help France invest its way back to economic health.

At his first Brussels summit he demanded that leaders put all options on the table in the drive to overcome the debt crisis and revitalise the moribund European economy.

What happened? Hollande’s push for renegotiation of the Fiscal Treaty, the new crisis-era EU debt rules, fell on deaf ears in Berlin.

The idea of a “debt redemption fund”, refinancing debt at low rates in a common fund in exchange for reforms, was also blocked by Berlin.

Other prime ministers – from Italy’s interim leader Mario Monti to Spain’s Mariano Rajoy – have had a go at renegotiating Europe’s fiscal rulebook but have also failed to get around Germany’s Angela Merkel.

What are the fiscal rules? All 28 European member states are bound by the so-called “Six Pack” rules, a package of economic measures introduced by the EU in December 2011 as an amendment to the Stability and Growth Pact, which dates back to 1997.

In addition, countries in the euro zone are subject to the “Two Pack” rules which add an extra layer of scrutiny.

Countries who break the rules are put into “excessive deficit procedure”, the naughty corner of European economic surveillance, and must take concrete measures to reach their targets by a certain date.

How is this likely to be resolved? Defenders of the economic surveillance powers of the European Commission argue that flexibility is already built into the existing rules.

In particular, a number of European countries, including large member states like France and Spain, have been given extra time to meet fiscal targets.

The option of giving countries some leeway to bring forward co-investment projects that are co-financed by the European Union may be sanctioned in some cases, but only for countries deemed to be already very compliant with fiscal targets.

This is touted by Germany and others as proof that the EU is indeed open to flexibility.

So what are Renzi’s chances of success? Based on previous attempts, not good.

Since he came to office in February, EU leaders have been waiting for Renzi to get beyond the reform announcement to implementation stage.

Berlin, in particular, is waiting for delivery before it is minded to back debt concessions.

In Renzi’s favour there is a European will for Italy to succeed, and a window of opportunity offered by the changing of the guard in Brussels.