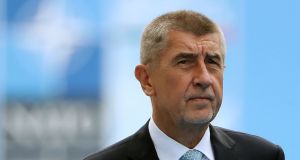 The Russian embassy in Prague has asked Czech police to protect one of its diplomats who local media say was involved in an alleged plot to poison politicians in the city.

Moscow has rejected Czech reports, based on unnamed sources in the country’s security services, that a Russian diplomat flew into Prague in March carrying ricin for a possible attack on the mayor of the capital, Zdenek Hrib, and the mayors of two of its districts, Ondrej Kolar and Pavel Novotny.

The politicians, who have angered Russia with various decisions in recent months, are themselves now under police guard.

The embassy denounced “false and unsubstantiated” reports after Czech media named Andrei Konchakov as the diplomat at the centre of the alleged plot.

“Due to personal harassment of the Russian diplomat by Czech media, he has started to receive threats. In light of this the embassy is forced to ask the Czech side to provide the employee of the diplomatic mission with police protection,” it said.

News website Seznam Zpravy said Mr Konchakov was met at Prague airport and taken to the Russian embassy by a driver whom the Czech security services believe is an undercover intelligence officer for Moscow.

Mr Konchakov told Seznam Zpravy that the allegations were a “mistake”, and that he had arrived in Prague with nothing more suspicious in his bag than “disinfectant and sweets”.

Russia has lambasted Mr Kolar for dismantling a monument to a wartime Soviet marshal in his area of Prague, and Mr Novotny riled Moscow by building a memorial in his district to renegade Russian troops who fought with the Nazis against the Red Army, before switching sides and helping to liberate Prague in 1945.

In February, Mr Hrib took part in a ceremony to rename the square outside Russia’s embassy in Prague in honour of Boris Nemtsov, a Russian opposition leader who was shot dead in Moscow in 2015.

Mr Kolar has said he is under police protection because “there is a Russian here who was given an assignment to liquidate me. Not only me, but Mr Hrib and Mr Novotny.”

Czech prime minister Andrej Babis said: ”It’s not acceptable – if it’s true – for a foreign state to take action against our citizens here.”

Moscow rejects strong evidence of its involvement in attacks on Russian critics of the Kremlin around Europe, including the polonium poisoning that killed Alexander Litvinenko in London in 2006 and the novichok nerve agent attack in Salisbury, England, that Sergei Skripal and his daughter Yulia narrowly survived in 2018.

Montenegro convicted two alleged Russian intelligence officers in absentia over a 2016 plot to kill the country’s then prime minister Milo Djukanovic. Moscow denied playing any role in that affair.