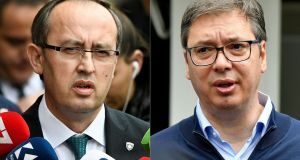 Leaders of Kosovo and Serbia will meet in Washington and Brussels in the coming days, as the US and EU intensify efforts to break an impasse in negotiations on normalising relations between the Balkan neighbours.

Serbian president Aleksandar Vucic and Kosovo’s prime minister Avdullah Hoti are due to hold talks at the White House on Thursday and Friday, and they are expected in Brussels on Monday for fresh discussions on normalising their relations.

The EU says neither state can join the bloc without reaching a deal in this regard, but Serbia continues to reject Kosovo’s independence 21 years after the end of a war between Belgrade’s forces and rebels from Kosovo’s ethnic Albanian majority.

Richard Grenell, US president Donald Trump’s special envoy for dialogue between Pristina and Belgrade, has said the talks in Washington will focus on economic issues that could build a platform for an eventual political agreement.

Mr Grenell has helped broker preliminary deals to upgrade or re-establish road, rail and air links between Serbia and Kosovo, and Thursday’s talks are expected to centre on those and other areas that could boost trade and investment in both countries.

“We’re kind of stuck on political discussions and we keep pounding the same issues over and over without much progress,” an unnamed adviser to Mr Trump told news agencies ahead of the talks.

While Mr Hoti insists that the ultimate aim of any talks with Serbia is to secure “mutual recognition” between the neighbours, Mr Vucic has said he only intends to discuss economic matters in Washington, but expects possible “surprises”.

Many Balkan analysts believe the White House’s interest in the Serbia-Kosovo dispute shows that it wants to broker a historic deal that Mr Trump could hold up as proof of his foreign policy prowess during his current re-election campaign.

“Whether the [US] president will take part in the meetings on Thursday and Friday remained to be determined,” he added.

Mr Vucic has said that if the price of talks with the US leader would be his acceptance of a deal recognising Kosovo’s independence, he “would reject the meeting with Trump and Hoti”.

The EU has announced that its foreign policy chief Josep Borrell and special envoy Miroslav Lajcak will host talks between Mr Vucic and Mr Hoti on Monday, following “expert-level” talks over the weekend.