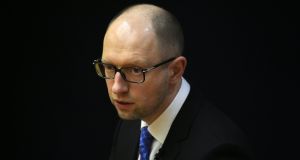 Ukraine’s embattled prime minister is resigning, opening the way for the formation of a new government to end a drawn-out political crisis.

In a televised address on Sunday, Arseniy Yatsenyuk said his resignation would be formally submitted to parliament on Tuesday.

Mr Yatsenyuk’s cabinet survived a no-confidence vote in February. But two parties left the governing coalition in protest, depriving the coalition of its majority in the Ukrainian parliament.

Mr Yatsenyuk (41) said on Facebook that his party will stay in the coalition allied with president Petro Poroshenko.

“We cannot allow the destabilisation of the executive branch during a war,” Mr Yatsenyuk said in an emailed statement on Sunday.

“This would be inevitable, if after this resignation a new government of Ukraine is not selected immediately. Having done everything to ensure stability and the continuity of our course, I declare my decision to transfer the obligations and responsibilities of the head of government of Ukraine.”

His party and that of Mr Poroshenko led a ruling coalition that promised to bring European levels of transparency to the ex-Soviet republic after decades of misrule. The team splintered over stalling efforts to stamp out corruption amid a pro-Russian insurgency in the country‘s east and Mr Yatsenyuk in February survived a no-confidence vote triggered by Mr Poroshenko’s party.

“The coalition majority in parliament is being renewed,” Mr Yatsenyuk said in his statement. “A new agreement is based on the purposes and principles of our cabinet of minister’s program.”

Mr Yatsenyuk’s decision leaves parliament with 30 days to form a new coalition that can select a cabinet, with Ukrainians and the nation’s foreign backers losing patience over delays in fighting corruption and modernizing the economy.

Political uncertainty and a failure to tackle graft have delayed disbursement of the International Monetary Fund rescue loan. Central bank governor Valeriya Gontareva urged politicians this month to end the crisis “immediately” so co-operation with the IMF can be restored and foreign reserves, which stood at $12.7 billion at end-March, can continue to recover.