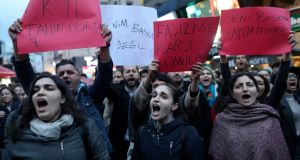 Protesters hold placards reading “You are not my president” during a rally against the referendum results in Istanbul, Turkey. Photograph: Sedat Suna/EPA

Turkish opposition parties and an international monitoring mission have questioned the handling of Sunday’s referendum, which approved a new presidential system to govern the country from 2019.

“The only way to end ongoing discussions over the referendum’s legitimacy is to annul it,” said Bülent Tezcan, a deputy chairman of the Republican People’s Party, which campaigned against the amendments. “The YSK [High Electoral Board] did not and cannot stage a safe election . . . This referendum will always be remembered as illegitimate.”

A spokesperson for the opposition People’s Democratic Party claimed that about three million voters had been affected by the election board’s decision to accept unstamped ballots, a move that was also criticised by independent observers of the poll.

Opposition parties have vowed to take the case to Turkey’s constitutional court and European Court of Human Rights if their grievances are not resolved by the electoral board.

The referendum observation mission from the Organisation for Security and Co-operation in Europe (OSCE) said it, too, found numerous issues with the campaign, reporting it was carried out on an “unlevel playing-field”.

“The state took no steps to ensure voters were provided with impartial information. The work of the electoral board lacked transparency,” said Tana de Zulueta at a briefing in Ankara yesterday.

“The legal framework is inadequate to hold a democratic election . . . The 18 amendments were voted on in a single package, contrary to international standards. None of the proposed amendments featured on the ballots.”

Twenty-four of the OSCE’s observers were dispatched across Turkey.

The mission also stated that people forced to flee their homes in provinces affected by security threats faced difficulties registering, and some were not able to vote. The regions in question are predominantly Kurdish-inhabited, a cleavage of society that largely voted against the proposed changes.

The report also noted that of the 92 recognised political parties in Turkey, only 10 were allowed to participate in the campaign, while no civil society groups were accorded permission to do so.

President Recep Tayyip Erdogan, however, claimed the OSCE’s findings were politically motivated and that Turkey may hold a referendum to decide whether to continue its push for EU membership.

An editorial in the pro-government Daily Sabah said the Turkish people had emerged victorious in the referendum.

“Nine months after a failed coup attempt and amid an international smear campaign against their country, they came through and sent a strong message to Turkey’s enemies,” it stated.

The referendum saw 51 per cent of voters back changes to the constitution that would see the president take political control of the country after the next election, slated for 2019.

Analysts say the chances of the opposition’s attempts to overturn the referendum’s outcome are slim.

“We’ve seen over the last year that president Erdogan and the government have almost total control of the judicial system. Past experience shows that any judge opposed to the government has been removed or jailed,” said Gareth Jenkins, a senior associate fellow at the Silk Road Studies Program.

Protests against the referendum’s outcome continued in more than half a dozen neighbourhoods across Istanbul and Ankara on Monday evening. On balconies across several districts of the city, residents took to banging on pots and pans, as they did during Mr Erdogan’s victory speech the previous night.

Hundreds of people gathered at the Kadiköy ferry port in an area in which 80 per cent of voters opposed the constitutional changes, and marched through the streets chanting slogans against the president. Unlike other protests and gatherings during the referendum campaign, no police were present on the streets.