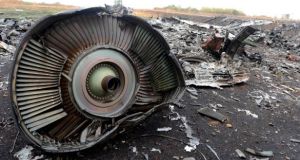 Part of the Malaysia Airlines Flight MH17 at the crash site in the village of Hrabove (Grabovo), about 80km east of Donetsk in Ukraine, in September 2014. Photograph: Alexander Khudoteply/AFP/Getty Images

An international investigation into the 2014 downing of Malaysia Airlines flight MH17 has released a series of phone intercepts, including one between a top aide to Russian president Vladimir Putin and pro-Russian rebels accused in the crash.

Calls between officials in Moscow and pro-Russian rebels in eastern Ukraine mostly took place via secure telephones provided by the Russian security service, and intensified ahead of the disaster in the first half of July 2014, the Joint Investigation Team (Jit) said.

“The indications for close ties between leaders of the DPR (Donetsk People’s Republic) and Russian government officials raise questions about their possible involvement in the deployment of the (missile), which brought down flight MH17 on 17 July 2014,” the Jit said.

MH17 was shot out of the sky over territory held by pro-Russian separatists in eastern Ukraine as it flew from Amsterdam to Kuala Lumpur. All 298 on board died.

The Dutch-led team said the intercepts showed two leaders of the self-proclaimed Donetsk People’s Republic (DPR), who were charged with murder in June, had been in contact with Vladislav Surkov, a senior Putin aide, and Sergey Aksyonov, a Russian-appointed leader in Russian-annexed Crimea.

The Russian government, which has denied involvement in the plane’s destruction, said on Thursday it could not verify the authenticity of the intercepts.

Russian foreign ministry spokeswoman Maria Zakharova told a news briefing in Moscow that the intercepts followed a wave of “fake news” on the subject and should be regarded with scepticism.

The Kremlin and Mr Surkov did not respond to requests for comment.

The investigation team published the telephone call intercepts on its website and appealed for witnesses to come forward.

In a conversation on July 3rd, 2014, prosecutors said Mr Surkov indicated reinforcements would be coming from Russia: “On Saturday they are already departing for the south to be combat ready.”

There were calls between rebel forces and authorities in Moscow “on a daily basis to discuss administrative, financial and military matters in the DPR”. The Jit released a series of phone numbers, asking witnesses to help identify the callers.

Investigators have previously found that the missile that hit the airplane originated from Russia’s Kursk military base, not far from the Ukrainian border. In June, the Jit charged three Russians and a Ukrainian with 298 murders.

The rebels and Moscow have denied involvement in the downing of MH17. Russia also denies Western accusations that it sent ground troops, weapons and funding to the rebels in eastern Ukraine.

The four suspects are due to go on trial in absentia in a Dutch court on March 9th next year.