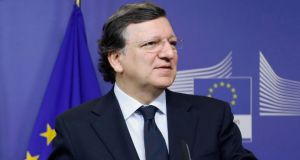 Further economic and monetary integration must be a priority if the European Union is to meet the challenges of the 21st century, a conference in Brussels heard yesterday.

At a conference on the future of European and monetary union, European Commission president José Manuel Barroso said that achieving a “deep and genuine monetary union” was a priority. However, he acknowledged, “with the benefit of hindsight”, the difficulties that have beset the idea of monetary union since the onset of the crisis.

“While the leap towards monetary union was taken, the economic leg of the EMU [European Monetary Union] stayed behind,” he said. However, he stressed the financial crisis was not a crisis of the euro, but rather “an economic and financial crisis in individual countries that share the same currency and therefore impacts on the euro zone as a whole”. The euro remains “a credible, stable and strong currency”, he said.

Mr Barroso also called for greater political integration. “Europe’s economic interdependence, so strikingly highlighted by the financial crisis, calls for increased political integration,” he said, adding that there was no room for “half-integrated institutions”. The commission plans to set out its views on treaty change before next May’s European elections, he added.


Banking union
The EU’s commissioner for economics and monetary affairs, Olli Rehn, emphasised the need for the swift implementation of banking union – the EU’s proposal to create a Europe-wide system to supervise and manage banks in trouble.

“The construction of a banking union will reinforce financial stability through more uniform and reliable arrangements for the supervision and resolution of banks,” Mr Rehn said yesterday. Banking union represents a “decisive contribution” to the repair of the banking system in Europe.

Progressing the implementation of banking union will be a key focus of Irish officials in the final weeks of the Irish presidency. It is due to bring forward a proposal on how future bank collapses are handled at next week’s meeting of finance ministers in Brussels, including a proposal to “bail-in” deposits of over €100,000 in the event of a bank wind-down. Under the proposal, depositors would rank ahead of other creditors in the event of a bank collapse.

Addressing MEPs in Brussels yesterday, the head of the 17 euro-zone finance ministers, Jeroen Dijssellbloem, said deposits under €100,00 “will not be touched . . . We need as soon as possible, the resolution directive which will deal with how we will deal with deposit holders.”

The conference, attended by a number of Irish TDs, including Stephen Donnelly, Dominic Hannigan and Peter Mathews, also debated democratic accountability, with Mr Barroso warning “Europe’s democratic legitimacy and accountability must keep pace with its increased role and power”.

Prof Brigid Laffan, of UCD, who moderated a session on democratic legitimacy and accountability, said it had addressed “who speaks for Europe, who represents Europe”. She said Europe’s political leaders must meet the challenges facing the EU: “Failure to meet those challenge would be very detrimental for all our countries and all of our citizens.”