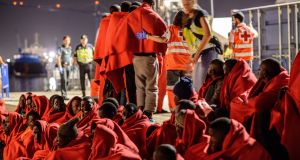 A group of 52 migrants who were rescued by the Spanish coastguard are met by Red Cross personnel at Málaga harbour on June 21st. Photograph: Guillaume Pinon/NurPhoto via Getty Images

Few places show off Málaga’s status as a developed hub of consumerism and culture as much as the area surrounding its port. Luxury boats and cruise liners are moored in its waters and nearby, tourists wander along a swept promenade in the shade of palm trees. A museum dedicated to Pablo Picasso, the city’s most celebrated son, is a short walk away, as are countless cafés, souvenir shops and some large, air-conditioned shopping malls.

There is little here at first glance to suggest a city that is on the front line of one of Europe’s sternest challenges. But Málaga, on Spain’s southern Costa del Sol and only 75 miles from Morocco, receives a constant flow of African migrants, many of who have survived a harrowing and hazardous journey.

On June 15th, two 25-year-old pregnant women from Ivory Coast, Keita and Fufana, were picked up by the Spanish coastguard, floating in an inflatable boat with 31 other migrants off the shores of Andalucía. Scared and exhausted, they had nonetheless realised their dream of reaching Europe.

“When I was in Ivory Coast I wanted a better life, because I lost my parents,” says Fufana. “I was very happy when I got to Spain. ”

The two women left their country separately, each having lost family members during a simmering civil conflict. Having sold their belongings to raise money, they headed north and met in Mali, crossing that country and then Algeria by car and sometimes on foot. In Morocco, they slept rough in a neighbourhood of Rabat.

“In Morocco we weren’t treated well,” Keita says. “There weren’t people there to help us. Friends of ours died there.”

One man offered the women accommodation and found them domestic work. But the jobs were gruelling and the man was no benefactor: he raped Keita and Fufana, leaving them both pregnant.

Then, after four months living in desperate conditions in a forest in northern Morocco, they pooled their funds with other migrants to try and reach Europe by water. Their first two attempts were thwarted because of police patrols, but on the third the group managed to cram into a motorised inflatable boat and reach Spain.

“When we arrived we saw that people here are very kind,” says Keita, who has been cared for by the local Red Cross.

Many others do not make it. More than 5,000 people died attempting to cross the Mediterranean to Europe last year, according to the Spanish refugee charity CEAR; 40,000 are believed to have perished this century. On Tuesday, tragedy struck again when 49 migrants are thought to have died trying to reach Spain after their boat capsized.

Spain’s southern coast is by no means the main port of entry to Europe. Only around 2 per cent of the 360,000 so-called “irregular arrivals” to Europe last year were via that route – Italy, Greece and Eastern Europe are the principal entry points. But Spain is being tested in many similar ways to those countries.

In recent weeks there has been a sharp increase in the number of migrants to Spain, due in great part to calm weather on the Mediterranean, which encourages attempted crossings.

Between January and mid-June, 749 migrants had been taken in by the authorities in Málaga alone – more than double the same period in 2016. For a few days last month the spike in arrivals was such that a local sports centre was adapted to house them.

“We don’t have the infrastructure with which to treat them in a dignified way,” says Samuel Linares, provincial coordinator of Red Cross in Málaga, of the recent influx. “It’s not a problem we had before, because the number of people coming was smaller.”

The Red Cross and other NGOs look after new arrivals before the authorities decide their legal status and whether to let them stay in Spain.

But while those numbers are currently rising across Spain’s southern coast, elsewhere they have dropped dramatically.

A decade ago, the flow of Sub-Saharan migrants to Spain’s Canary Islands, off the west coast of Morocco, had reached crisis point. In 2006 alone, over 31,000 Sub-Saharan migrants reached the islands, according to figures provided by the Spanish government and the EU border agency Frontex, with thousands more believed to have died en route in previous years. Following a campaign of co-operation and investment between Spain and two West African nations, that number fell to just 671 last year.

Spanish civil guards patrol the coastlines of Mauritania and Senegal with their local counterparts, and Madrid has invested €168 million in security and development in those countries since 2005.

But migrants are still attempting to reach Europe via other routes. It’s a phenomenon that Julio Andrade, who oversees Málaga city hall’s immigration policy, calls “the balloon effect”.

“If you squeeze one area, the air goes elsewhere,” he says. “If there is a lot of police pressure and arrests of mafias around the Mediterranean routes via Greece and Italy [for example], then the mafias will look for other routes.”

A year ago, the European Commission announced a new strategy to tackle irregular migration along the lines of Spain’s Canary Islands formula. EU High Representative Federica Mogherini said the goal “is to support the [EU] countries that host so many people and foster growth in our [African] partner countries”.

But figures suggest the results are yet to be seen. Jon Iñárritu, a senator for the Basque Bildu coalition, warns that Spain’s investment in Senegal and Mauritania has been unaudited, allowing much of it to end up in the pockets of officials. “I’d like to see the EU, instead of bribing African countries to control migration, create channels where it is possible to migrate safely and people don’t have to risk their lives in boats, jumping fences or crossing deserts,” he says.

“If we invested more in safe routes and spent more on development in Africa so people didn’t have to leave, then we’d get results. But I fear Europe wants to copy a model that amounts to institutionalised bribery.”

Beyond the drama in the waters off the European mainland, international politics inevitably plays a major role in the flow of migration. Last year’s controversial deal between the EU and Turkey, under which the latter accepted the return of “all new irregular migrants” from Greece, was a well-documented example. But Morocco also appears willing to use the issue as a bargaining chip.

In February, nearly a thousand Sub-Saharan migrants reached the Spanish city of Ceuta in North Africa over three days by breaching or scaling the six-metre-high fence bordering Morocco.

That record-breaking number of arrivals and many more who followed suggested Morocco had deliberately relaxed its border controls. The reason was believed to be King Mohammed VI’s fury at a recent European Court of Justice ruling on an agricultural issue related to Western Sahara.

“How do you [Europeans] want us to do the job of stopping Sub-Saharan – and even Moroccan – emigration if today Europe doesn’t want to work with us?” said Moroccan agriculture minister Aziz Akhannouch at the time.

In Málaga there is a feeling of uncertainty and even anxiety that events taking place hundreds or thousands of miles away could have a knock-on effect in the waters nearby.

State repression in response to a wave of social unrest in the Rif region of Morocco, for example, is currently having a twofold migratory impact: Moroccans are starting to cross the Mediterranean to seek asylum in Spain, and the deployment of thousands of Moroccan police to the Rif region is making it easier for migrants elsewhere to board boats without being detected.

“Málaga right now has the capacity to handle this,” says Andrade of the city hall. “[But] we could find ourselves being overwhelmed if this situation continues, if boats arrive every day... Any city could be overwhelmed if it faced a constant influx.”