There are Vatican whispers that maybe the pope talks too freely

Pope Francis speaks about birth control during a news conference onboard the papal plane. Video: Reuters 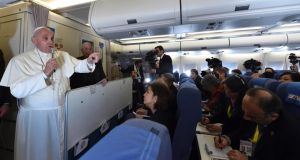 Pope Francis speaking to journalists on his flight back from Manila in the Philippines to Rome on Monday. Photograph: Reuters/Giuseppe Cacace

Does Pope Francis talk too freely and too much off the cuff? On a cold, wet January morning in the Vatican, that almost blasphemous thought crossed the minds of senior figures in the Holy See’s media machine, just hours after Francis touched down in Rome after yet another momentous pastoral visit, this time to Sri Lanka and the Philippines.

When the pope speaks of Catholics breeding “like rabbits” and offers to punch anyone who curses his mother, he inevitably generates worldwide headlines. Holy See insiders, however, point out that the pope’s eminently quotable remarks on complex questions like contraception and freedom of expression can easily be misunderstood. He is not calling for a change in Catholic Church teaching on contraception, nor does he justify jihadist violence when he suggests there is a limit to freedom of expression.

The pope’s handlers know all too well that there is no way of spin-doctoring the Francis message. This pontiff does his own thing. They also concede that this is one of the reasons why he is one of the most popular people on the planet, a religious leader capable of attracting seven million faithful to an open Mass in Manila last Sunday.

Only he, too, would speak off-the-cuff, extemporaneously to such a huge gathering. No pope has ever spoken so frankly and so informally to the Vatican press corps.

Curiously, many of those who greet the pope’s message of reform and inclusiveness with worldwide enthusiasm do not seem to notice that he is, in fact, teaching a basically very traditional, old-fashioned Catholicism. It is not what he teaches, however, it is the way that he teaches it. When he talks of kicking someone “where the sun don’t shine”, he might sound like a Brooklyn truck driver, but he is making a point about corruption.

How many of Sunday’s seven million would agree with the pope’s assessment of one of his predecessors, Paul VI, as a “prophet” because of the Humanae Vitae ban on contraception? How many would sympathise with Philippines president Benigno Aquino, a leader whose relationship with the Catholic Church has been strained primarily over the introduction of legislation that would provide free condoms to women?

After meeting with the pope last Friday, President Aquino complained that church leaders had been very critical towards him and yet silent to the abuses of past political leaders. While calling Francis “a unifying and revitalising voice”, the president was critical of the church’s “silence” during the regime of former dictator Ferdinand Marcos, saying:

“This [period] was a true test of faith when many members of the church, once advocates for the poor, the marginalised and the helpless, suddenly became silent in the face of the previous administration’s abuses, which we are still trying to rectify to this very day . . . In these attempts at correcting the wrongs of the past, one would think that the church would be our natural ally.”

Such criticism of the church would appear to have little impact on Francis’s popularity. Right now, said one senior Holy See figure yesterday, Francis continues to “walk on water”, a situation which undermines those within the Vatican administration who continue to oppose the “open” nature of his pontifical ministry.