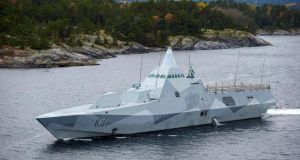 Swedish corvette HMS Visby patrols the Stockholm Archipelago, searching for what the military says is a foreign threat in the waters. Photograph: Marko Savala/Reuters

Sweden released a grainy photo of a mysterious vessel in Stockholm’s archipelago yesterday, as the military hunted for a foreign submarine or divers in the country’s biggest such mobilisation since the cold war.

The search in the Baltic Sea less than 50km from Stockholm began on Friday and reawakened memories of the final years of the cold war when Sweden repeatedly sought out suspected Soviet submarines along its coast with depth charges.

The military showed one picture of what appeared to be a craft surrounded by white ripples. The witness who took the photograph said the vessel then submerged – one of three sightings that the military said were credible reports.

The Swedish armed forces have consistently labelled the their hunt one of investigating “foreign underwater activity” but elaborated on what that might entail yesterday.

Rear Admiral Grenstad said the sightings had taken place in “an area that is of interest to a foreign power”, but added he was not in a position to link the observed activity to any particular nation. “This does not belong to us. It is a foreign vessel and we have no indications that there would be any civilians involved in underwater activity,” he said.

Reported sightings of one man dressed in black wading through waters led to speculation of Russian special forces in the archipelago, normally a popular holiday destination consisting of thousands of small islands.

The Russian defence ministry said yesterday that there were no emergencies in the Baltic involving its vessels. “Russian Navy ships and submarines are fulfilling their duties in the world ocean waters in accordance with the plan,” Interfax news agency quoted a ministry spokesman as saying.

In 1981, a Soviet submarine known under its Swedish designation U137 was stranded deep inside Swedish waters not far from a major naval base in the neutral country, sparking intense suspicion about the scale and motives of such incursions.