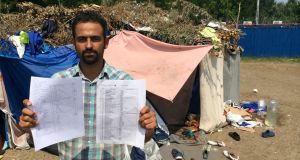 Mohsin Shah, an Afghan asylum seeker who manages lists of hundreds of migrants stuck at Horgos beside Hungary’s fence on its border Serbia. Photograph: Daniel McLaughlin

Far from his Afghan home and with little chance of joining relatives in Germany anytime soon, Mohsin Shah has landed a high-pressure job in a dusty migrant camp beside the fence that divides Hungary and Serbia.

After reaching Horgos in Serbia three weeks ago, Shah was put in charge of taking the details of new arrivals and giving them to the Hungarian border guards, from whom he receives a short list each morning of migrants chosen to enter a “transit zone” in the fence where asylum requests can be lodged.

Some 600 people now eke out an existence at Horgos and more arrive all the time, but Hungary admits a total of just 30 people each day into transit zones here and at nearby Kelebija, where about 200 are living in equally grim conditions.

“It’s hard. No one wants to stay here, and sometimes people pressure me. But I can’t change the list,” said Shah (35), whose fluent English and sangfroid serve him well as an unpaid conduit between the migrants and Serbian and Hungarian authorities.

The temperature regularly hits 35 degrees between the motorway and the metal border fence at Horgos, where the 10 chemical toilets are struggling to cope, there are no showers and a solitary tap supplies water that is not drinkable.

Some people have been stuck here for well over a month, and have fashioned sturdy shelters from branches gathered in nearby woods, and rigged up sunshades from blankets doled out by aid agencies.

Small children, the elderly and everyone in between bathe by filling empty bottles and buckets and dousing themselves as best they can, while women and young girls wash their families’ clothes in plastic basins beside the lone tap.

“Fights do occur, but we try to control things. It is understandable that people are tired, worried, frustrated. If only we had the internet here, people could talk to their friends and relatives, and this would immediately calm them down.”

Nowhere are key aspects of the refugee crisis clearer than at Horgos, from the migrants’ determination to reach the EU to the failure of states to tackle the crisis openly and co-operatively, to the smugglers’ lucrative exploitation of desperate people.

Hungary claims the transit zones are not part of its territory but a “no man’s land” where normal laws and obligations do not apply; and when it expels illegal migrants from the transit zone, it insists this is not an official readmission to Serbia, which would require the consent of Belgrade’s authorities.

For its part, Serbia is trying to prevent Horgos and Kelebia degenerating into dens of violence and disease, while ensuring they remain grim enough to encourage people to move to proper state camps further from the border.

The fact that some 3,000 migrants are now stuck in Serbia gives the lie to bold statements from EU leaders in March that the so-called Balkan route from Turkey to the heart of Europe had been firmly “closed”.

Arrivals are far fewer than last year, but Serbian officials say that between 50 and 200 migrants have been entering the country each day from Bulgaria and Macedonia, across terrain that is extremely hard to police and impossible to seal entirely.

“Serbia cannot be a parking lot for people from Afghanistan or Pakistan whom no one else in Europe wishes to accept,” said the country’s prime minister, Aleksandar Vucic.

On his orders, joint military and police teams are now patrolling Serbia’s borders with Bulgaria and Macedonia – potentially pushing the bottleneck of migrants further south.

Hundreds of people are once again sleeping in Belgrade’s parks, and a state-run transit centre in Subotica, a Serbian town near Horgos, is providing for 500 migrants instead of the 100 it was built to hold.

“The Balkan route has turned back this way, and no one can tell what will come next,” said Daniela Andjic, a senior worker at the Subotica facility. In a Belgrade park that has long been a focal point for migrants and people smugglers, scores of Afghans and Pakistanis now sleep on the sparse grass and wash in the drinking fountain.

“Me and my friends tried three times to get into Hungary, but were caught,” said Rashid Ahmat (18) from Pakistan. “Hopefully we will try again tomorrow. We have to provide for our families, so we can’t go home. We can only go ahead, to Europe.”