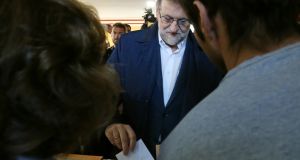 A new era of pacts and possible instability has begun in Spain after the country’s general election redrew the political map in dramatic fashion.

With 94 per cent of votes counted, prime minister Mariano Rajoy’s conservative Popular Party (PP) was the clear winner, with 122 seats, but it lost its majority in the 350-seat chamber.

The Socialist Party finished second, on 91 seats, narrowly ahead of anti-austerity force Podemos, whose strong performance, with 69 seats, delivered the surprise of the election.

Podemos, like Ciudadanos, whose 40 seats were below its expectations, is a new party which has pledged to battle corruption and breathe new life into Spain’s discredited public institutions.

The presence of the liberal Ciudadanos and the leftist Podemos as contenders made this an historic election.

The PP and Socialists have governed Spain without interruption since 1982 and this four-way race was the most open contest since the country returned to democracy in 1977.

If it fails to get enough support, the Socialists could get the chance to form a government. If no governing pacts can be formed, the prospect of new elections is a possibility.

“In the end, people vote according to what they think is best for their country,” said Mr Rajoy (60), as he cast his vote in Madrid.

Having won 185 seats in 2011, the PP’s majority was slashed as four years of unpopular austerity measures and a slew of corruption scandals sent voters to other parties.

However, Mr Rajoy’s insistence that he is the best candidate to oversee a fragile economic recovery seemed to pay off and clinch a second general election victory for the Galician.

The Socialist Party, meanwhile failed to capitalise on the unpopularity of the prime minister, losing voters to both Ciudadanos and Podemos.

The voter turnout, with 86 per cent of votes counted, was marginally higher than in 2011, at 73 per cent.

Besides the new electoral landscape, this was a crucial vote for Spain for other reasons.

The country’s territorial unity is under threat as separatists in Catalonia push for independence.

Markets were also watching the result closely for clues as to the future of the euro zone’s fourth-largest economy.