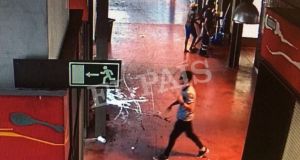 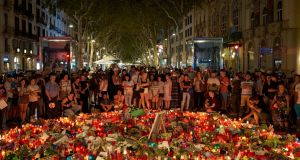 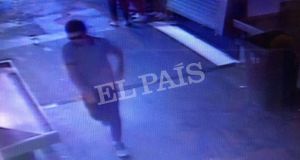 CCTV frame grab shows a suspect walking through La Boqueria market seconds after a van crashed into pedestrians in Barcelona on August 17th. Photograph: Courtesy of El Pais via Reuters .

Police were still hunting for missing members of the terrorist cell that killed 14 people in last week’s double attack in northeast Spain, as authorities revealed details of more of the victims.

The identity has still not been confirmed of the van driver who fled after ploughing into pedestrians on Barcelona’s Ramblas boulevard on Thursday afternoon, killing 13 and injuring more than 100.

However, police believe it may have been Younes Abouyaaquob (22), whose whereabouts are unknown.

Spanish police official Josep Lluis Trapero is said to have told a press conference there is no specific information to indicate the missing suspect’s whereabouts, but some reports suggest he may have crossed the border into France on foot.

Eight hours later, a car deliberately drove into people in the town of Cambrils, injuring seven, one of who died later in hospital. Police shot dead the five men who had been in the car.

Four men have been arrested, but two other suspects, Youssef Aallaa and Abdelbaki Es Satty, are unaccounted for. Investigators think they might have been killed in an explosion at a property in the town of Alcanar on Wednesday.

On Sunday, the Catalan police chief, Josep Lluís Trapero, confirmed that his force believed the cell had been preparing one or more bigger attacks in Barcelona, but that the apparently accidental explosion at the Alcanar house, where the terrorists had been plotting, altered their plans.

Members of Younes Abouyaaquob’s family appealed for him to turn himself in and they blamed Es Satty, an imam, for radicalising him and several other suspects who were all from the town of Ripoll, north of Barcelona.

The identities of three more victims were confirmed on Sunday, including Julian Cadman, a seven-year-old boy with joint British and Australian nationality, who was separated from his mother on the Ramblas when the Barcelona attack took place.

Overall, 12 of the 14 victims have been officially identified: five Spanish, two Italians, two Portuguese, one Belgian, one American and one British-Australian.

A total of 51 people are still in hospital, 10 of them in a critical condition.

A Mass was held in Antoni Gaudí’s Sagrada Familia basilica in Barcelona on Sunday in tribute to the victims.

“Unity makes us strong and division eats away at us, it destroys us,” said the archbishop of Barcelona, Juan José Omella, during the service.

There was a heavy police presence around the Camp Nou stadium, where Barcelona FC were playing Real Betis on Sunday evening.

Officers armed with machine guns and shotguns lined the route fans took to the stadium, while police snipers could be seen on rooftops.

The prospect of more attacks failed to deter the 100,000 fans who turns up for the match. There was a defiant atmosphere around the stadium as supporters shouted “Viva Barcelona” and “Viva Catalonia”.

A minute silence was held before the match and the players’ shirts had Barcelona printed on the back instead of their names.