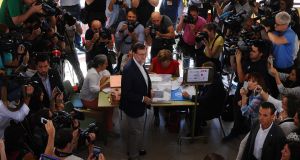 Mariano Rajoy, Spain’s acting Prime Minister of the caretaker government, casts his vote for the Spanish general election in Madrid. Spanish voters went back to the polls after the last election in December failed to produce a government. Photograph: Denis Doyle/Getty

Spain’s traditional parties defied the polls to hold off the challenge of new political forces as the governing Popular Party (PP) made gains in the country’s general election.

In the second election in six months, the PP of acting prime minister Mariano Rajoy took 137 congressional seats, 14 more than before, although still well short of a majority in the 350-seat chamber, with 88 per cent of votes counted.

The main surprise of the night was the Socialist Party’s success in holding on to second place with 85 seats, clearly ahead of the Unidos Podemos leftist coalition on 71.

Polls leading up to the election had shown Unidos Podemos – a merger of the anti-austerity Podemos with the communist-led United Left (IU) – to be ahead of the Socialist Party.

However, the Socialist Party, which has been the leading party on the left since the return to democracy, performed better than expected, due in great part to votes in its rural strongholds, ensuring a disappointing result for Unidos Podemos.

However, Mr Rajoy’s message that his party should continue to supervise the country’s economic recovery seems to have been successful in winning back some of voters he lost six months ago. The uncertainty created by the UK’s vote to leave the European Union was seen as a factor that was likely to favour his party.

“Spain will be what the Spanish people want it to be and it will have the government and congress members that Spaniards want,” Mr Rajoy said as he voted in Aravaca, Madrid.

As was the case after December’s vote, Spain’s parliament is finely balanced between left and right, making the creation of a new government and the avoidance of yet more elections challenging.

With a total of 37 million Spaniards eligible to vote, turnout was several points lower than in 2015 and the day went smoothly, with few incidents. With Spain using cutting-edge vote-counting technology, the results came in extremely fast.

“Spain’s got some big challenges to face in the next few years, so I think these elections are important, really important,” said Jorge Carrasco, a restaurant owner.

He voted for Ciudadanos, describing it as the “least worst” option.

It was a bad night for Ciudadanos, which saw its complement of seats dip substantially from 40 in 2015. That result weakens the liberal party’s hand when it comes to its chances of helping form a new government.