Drugs, guns, explosives dominate scene in which ‘new life can be invented with ease’ 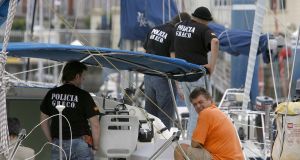 Members of the Spanish Special Group Against Organised Crime engaged in a drugs investigation aboard a catamaran in the harbour of La Coruna. Photograph: EPA

Spain has long been characterised as a refuge for criminals fleeing the law enforcement agencies of their own countries, a place where fugitives could relax in the sun, safe in the knowledge that the local authorities would not bother them.

However, while more recent action by both foreign and national police has begun eroding that image, Spain continues to be both a haven for fugitives and a major hub of international crime.

About 500 criminal groups were dismantled in 2013, according to the interior ministry; more than 80 per cent of them had foreign members.

The country’s geographical position has been key in this respect. Relatively isolated from mainland Europe, Spain and its islands have 8,000km of coastline.

To the south, just 15km away at it closest point, is north Africa, with two Spanish enclaves on African soil, Ceuta and Melilla.

Ricardo Magaz, a professor of criminal phenomenology at Uned-IUGM university, points to the rural region of Galicia, on Spain’s northwestern coast, as a magnet for Latin American drug traffickers.

“A large amount of drugs is shipped into that area by the cartels – they bring in hashish, but particularly cocaine to that zone,” he says.

North Africa, he says, is another big entry point for drugs into Spain, although big ports such as Barcelona, Valencia and Málaga, are also frequently exploited.

Weapons and explosives though are also a fixture on the country’s black market, while people-trafficking has boomed in recent years, as increasing numbers of migrants from the Middle East and sub-Saharan Africa attempt to use Spain as an entry point into Europe.

Recently, there has been a spate of “express kidnappings” and even fake kidnappings (when money is extorted by criminals who pretend to have abducted a family member of the victims), both practices imported from Latin America.

Spain’s status as the world’s third most popular tourist destination – with 60 million annual visitors – adds to its attraction for foreign criminals.

“The fact that tourism is the country’s main industry allows fugitives to blend in and make themselves invisible,” says Magaz, who says Spain harbours the highest number of foreign fugitives in Europe.

In the past, a lack of extradition agreements and the knowledge that their capture was not a priority for the Spanish authorities added to the sunshine, food and nightlife as draws for criminals seeking either a new base for operations or a place to hide out and enjoy retirement.

“There was a feeling in the past that the Spanish were not too bothered if, say, British criminals were fighting amongst themselves,” says Steve Reynolds, head of the international department at the UK’s National Crime Agency, which pursues British and Irish criminals abroad.

Reynolds points to the European arrest warrant, introduced in 2004, as key to clamping down on Spain’s foreign criminal element. He also highlights the development of “excellent co-operation” between British, Irish and Spanish law enforcement.

Since 2006, the National Crime Agency has tracked down a large number of British and Irish fugitives via Operation Captura, which appeals to holidaymakers and ex-pats in Spain for information about wanted individuals.

One campaign last summer, in which vans drove around the Costa del Sol with large photographs of fugitives on them, led to four arrests.

Magaz says that the local authorities have also improved their own capabilities.

“Years ago, the Spanish police specialised in combating terrorism due to the existence of the [Basque] terrorist organisation Eta, ” he says.

“Now, due to necessity, they have had to specialise in tracking down the fugitive criminals who come to Spain, whether it be to lie low or to carry out criminal activities here.”

In recent years, for example, the introduction of a number plate recognition system in Spain means police can instantly find out if the foreign vehicle they have pulled over has any legal glitches.

Meanwhile, Spain’s anti-terrorism department and the unit that fights organised crime have recently been merged, an acknowledgment that jihadist activity is frequently financed by crime, as was the case with the 2004 train bombings in Madrid, which killed 191 people.

With the increased pressure, Reynolds of the National Crime Agency says many of the Spain-based criminals tend to keep a low profile and often are involved in legitimate businesses, such as bars and nightclubs.

The more prudent ones, he adds, find themselves confined to the insides of their luxury villas, due to fear of arrest.

However, as Berta González de Vega, a journalist for El Mundo newspaper who lives on the Costa del Sol, says, the attractions remain for those seeking to leave their past behind.

“This place is the most fascinating social laboratory,” she says.

“I’m living among legitimate millionaires and drug-traffickers, but nobody here asks you anything – what your job is, anything like that.

“ It’s very easy to invent a life for yourself here.”