In Syria and Iraq, Islamic State displays the heads of its victims in this way

French President Francois Hollande says an attack that morning in southeast France was of 'a terrorist nature' and that a suspect had been arrested and identified. Video: Reuters

Police cordon off the scene of an attack on a gas factory in Saint-Quentin-Fallavier, France. Video: BFMTV 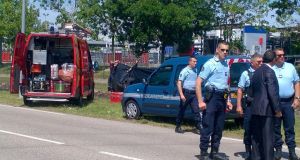 French police cordon off the area where a decapitated body was found near the Air Products company, in Saint-Quentin-Fallavier. Photograph: AFP

It was the severed head stuck on the factory security fence, like a trophy, that most horrified France on Friday morning.

In Syria and Iraq, Islamic State displays the heads of its victims thus.

In May 2013, attackers tried to behead British soldier Lee Rigby, on a street in London. But France had not yet known this horror.

Interior minister Bernard Cazeneuve identified the attacker as Yassin Salhi from Saint-Priest, a banlieue 21 km from Lyon. He is reportedly 35 years-old, and he staged his attack in the holy month of Ramadan, deemed propitious for jihad.

Mr Salhi’s radicalism was recorded on the DGSE intelligence service’s “S” list from 2006 until 2008. But he was not known to have been in contact with extremists, had no police record and was taken off the list.

The victim, whose body was covered with inscriptions in Arabic, has not yet been identified. Some speculated that he was murdered elsewhere, decapitated and brought to the Air Products gas factory. Two Islamist flags were found on the scene of the crime.

As anti-terrorist judges began their investigation, many questions remained unanswered.

Mr Salhi was arrested by firemen at the scene. It was not clear if he had an accomplice. Did he, or they, receive orders from outside France? From Islamic State?

The words “barbarous”, “abject” and “horror” were on the lips of every politician.

President Francois Hollande left the European Council in Brussels to head an emergency cabinet meeting in Paris. “There is emotion,” Mr Hollande said.

“But emotion must not be the only response. Action, prevention, deterrence and the necessity… not to give in to fear… Creating useless divisions and suspicion would be intolerable.”

Had Mr Salhi merely crashed his car through the gate of the Air Products gas and chemical factory in an industrial zone near Lyon-Saint-Exupery airport, detonating two gas canisters and creating a deflagration that nearby workers mistook for a jet-engine misfiring, France would not have been so shaken.

The explosion was not even strong enough to destroy Mr Salhi’s car. It injured two factory workers.

But there was that macabre signature, the severed head and the body with its Arabic inscriptions …

The January attacks were just beginning to recede in the minds of the French. Attention had turned to the summer holidays. There was talk of lowering the level of security alerts and the 24/7 protection provided by tens of thousands of police, gendarmes and soldiers.

The attack in the industrial zone at Saint-Quentin Fallavier was a brutal reminder that the threat is ever present, that jihadists strike where they are least expected.

After government buildings, synagogues and churches, France is now strengthening protection of its factories. Industry, too, is a target; as if one by one, the various sectors of French life are slowly being locked down.