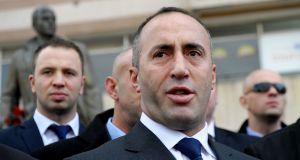 Former prime minister of Kosovo Ramush Haradinaj, who was arrested in France on Wednesday on foot of a warrant issue by Serbia. Photograph: Armend Nimani/AFP/Getty Images

Serbia is requesting the extradition from France of Ramush Haradinaj, a former prime minister of Kosovo whom Belgrade accuses of war crimes.

Mr Haradinaj, who was a rebel leader during Kosovo’s bloody fight to break from Serbian rule in 1998-1999, was arrested on a warrant issued by Belgrade when he landed at an airport in eastern France on Wednesday.

When asked on Thursday whether he would seek Mr Haradinaj’s extradition, Serbian prime minister Aleksandar Vucic replied: “You bet I will.”

“Our prosecutor’s office has numerous pieces of evidence against Mr Haradinaj. He is accused of so many [crimes] that they are impossible to list,” Mr Vucic said.

Serbia has long accused Mr Haradinaj of committing atrocities during the 1998-1999 Kosovo conflict, when he was nicknamed “Rambo” by fellow guerrillas.

He served as Kosovo’s prime minister for 100 days in 2004-2005 before travelling voluntarily to the United Nations court in The Hague to face trial, for allegedly torturing and killing Serbs and ethnic Albanians who collaborated with them.

Mr Haradinaj was cleared in 2008 and at a retrial four years later. He returned to politics in his homeland, where he is now an opposition leader, but he is still dogged by Serbia’s claims about his wartime record.

In June 2015 he was detained in Slovenia on a Serbian warrant, but released two days later.

Mr Vucic expressed hopes for a different outcome this time. “It would be illogical that France, as a state with the rule of law, does not comply with the law,” he said.

“They over in Europe, if they don’t like it . . . super. Let him go once again, then come here to lecture me about . . . the rule of law,” he added, in reference to Serbia’s slow-moving accession talks with the European Union.

“We members of the Kosovo Liberation Army are proud to have fought against the discriminatory and criminal laws of Slobodan Milosevic’s regime,” he said, referring to the belligerent nationalist who led Serbia in the 1990s.

The prospect of eventual EU membership has coaxed Serbia and Kosovo – which formally declared independence from Belgrade in 2008 – to hold talks on practical co-operation and issues concerning Kosovo’s ethnic Serb minority.

Tensions still flare, however, most recently when Kosovo’s parliament – dominated by deputies from its ethnic Albanian majority – voted last week to demolish a wall built by Serbs in the ethnically divided town of Mitrovica.

Serbs said the wall was intended to prevent landslides, but Kosovar officials denounced it as inflammatory and likely to deepen divisions between the two communities.