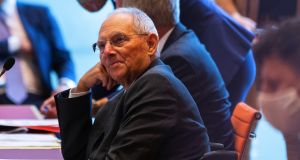 Bundestag president Wolfgang Schäuble: “The principles of the rule of law and democracy oblige the parliamentary legislator to make decisions itself and not leave it to the administration.” Photograph:Bloomberg

Bundestag president Wolfgang Schäuble has urged German MPs to take back control of Covid-19 legislation rather than rubberstamp an extension of  emergency provisions enacted in March.

In an unprecedented step Dr Schäuble, the second highest figure in Germany’s constitutional order, read the riot act to all 709 MPs.

He flagged legal doubts on whether emergency legislation from March, with its “extremely intensive and far-reaching limits on fundamental rights”, could be justified in the medium- to long-term. Particularly problematic, he added, was a provision in the legislation allowing the imprisonment of “sick, those suspected of being sick or of being infectious”.

“The principles of the rule of law and democracy oblige the parliamentary legislator to make decisions itself and not leave it to the administration,” he wrote in a letter to MPs. “The more intensive and broader the effect of the intervention in fundamental rights, the greater the concentration of parliamentary regulation must be.”

In effect, his letter urges Germany’s parliamentary parties to push back against the federal government. In particular, he says, they should agree to legislation – or extensions of emergency regulations – only if the reasons are clear and have a clear time limit, with extensions requiring fresh parliamentary approval.

This legislation gives the federal government additional powers, such as who to test at airports or how many intensive care beds hospitals must make available. Its revised form would give federal health minister Jens Spahn additional powers, including competences over any Covid-19 vaccination programme.

After close co-operation since last March, coronavirus tensions have been building in recent weeks between Germany’s executive and legislature – at federal and state level.

Unusually, criticism of the executive can be heard across party lines in the Bundestag.

One of its parliamentary vice-presidents, Wolfgang Kubicki of the liberal Free Democratic Party, has argued that “it is the task of parliament to make fundamental decisions, not of government members”.

Even Carsten Linnemann, an MP for Dr Merkel’s Christian Democratic Union, has described efforts to extend emergency measures as an “unsettling development”.

The German media has largely thrown its weight behind the demand for more parliamentary oversight.

“Political emergency situations are not good for democracy, robbing it of its strength,” noted the Süddeutsche Zeitung daily. “Fundamental debates, supported by well-informed experts in committees, are the best way to reach good decisions that will be supported by the populace.”

The row has echoes of the euro crisis, when the federal constitutional court in Karlsruhe warned the Bundestag it was under-utilising its finance policy competences vis-a-vis the federal government. The resulting boost in Bundestag oversight of German contributions to the ESM bailout fund allowed Berlin MPs to study the outline of Ireland’s budget before their Dublin colleagues.