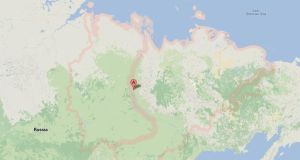 The Mi-8 aircraft operated by Polar Airlines caught fire after crashing in the Sakha region of Siberia in Russia. Image: Google Maps.

A helicopter packed with passengers crashed in Siberia today, killing at least 19 of the 28 people aboard, Russia’s civil aviation commission said.

The Mi-8 aircraft operated by Polar Airlines caught fire after crashing in the Sakha region with 25 passengers and three crew on board, the Interstate Aviation Committee said.

Citing a surviving crew member, the committee said on its website that 19 people were killed.

Sakha, also known as Yakutia, is a vast region stretching north of the Arctic circle and helicopters are frequently used to transport people to remote areas.