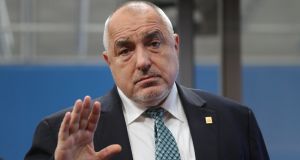 A string of lurid spying and corruption scandals has soured the traditionally warm relations between Russia and Bulgaria, prompting Moscow’s foreign intelligence service to accuse the US of targeting Kremlin allies in eastern Europe.

Bulgarian prosecutors have named three Russians whom they have charged with attempted murder in a mysterious 2015 poisoning case, which is being investigated for possible links to the nerve agent attack on former Russian double agent Sergei Skripal in Salisbury in 2018.

They are accused of trying to kill Bulgarian arms dealer Emilyan Gebrev, his son and a manager at his weapons firm. They survived and investigators renewed their interest in the case after Mr Skripal and his daughter Yulia nearly died from poisoning by novichok in an attack blamed on Russian military intelligence (GRU).

Sofia named one of the accused as Sergei Fedotov, who allegedly used an alias with the initials DVS. That points to Denis Vyacheslavovich Sergeev, a senior GRU officer who investigative website Bellingcat says was in Britain when the Skripals were poisoned.

Bellingcat published evidence on Tuesday that another of the indicted Russians, named by Bulgaria as Georgy Gorshkov, is actually Yegor Gordienko, who was accredited as a Russian diplomat to the World Trade Organisation in Geneva.

Moscow and Sofia were particularly close allies during the Soviet era and Russia continues to be a major economic partner and dominant energy supplier for Bulgaria, but recent rows have strained relations.

Sergei Ivanov, a spokesman for Russia’s foreign intelligence service (SVR), said “the US special services have launched a major campaign to discredit political and public figures in eastern Europe who back the development of good neighbourly relations with Russia”.

“Bulgaria has become the epicentre of this campaign in the Balkans,” he told Russia’s Tass news agency on Friday.

Mr Ivanov also dismissed reports that SVR chief Sergei Naryshkin had used a recent visit to the United Arab Emirates to seek the release of Bulgarian billionaire Vasil Bozhkov, who is wanted in his homeland on charges ranging from extortion to illegal acquisition of items in his priceless collection of ancient treasures. The gambling tycoon, nicknamed “The Skull”, denies all wrongdoing.

Critics of Bulgarian prime minister Boiko Borisov accuse him of trying to curry favour with the West amid corruption allegations.

In response to reports that he is under investigation in Spain over suspicious property deals, Mr Borisov said: “Let them do their investigation but I’m pretty sure this all comes from the east and I’ll bet a few [Russian] roubles on that.”