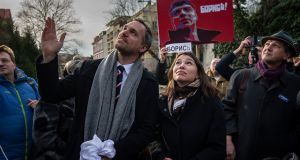 Zhanna Nemtsova, daughter of Boris Nemtsov, and Prague’s mayor Zdenek Hrib during the official event of renaming the square where the Russian embassy is placed after the murdered Russian opposition leader Boris Nemtsov on the 5th anniversary of his assassination on February 27th, 2020. Photograph: Gabriel Kuchta/Getty

Prague has named a square beside its Russian embassy after Kremlin critic Boris Nemtsov five years after he was shot dead, as the European Union and United States urged Moscow to bring all those responsible for his murder to justice.

The Czech capital also named a promenade in a park near the embassy after journalist Anna Politkovskaya, who exposed atrocities committed by Russian forces and pro-Kremlin militants in Chechnya before being shot dead in her Moscow apartment building in 2006.

“Both these personalities pushed for democracy and for that they were shamefully murdered. They deserve to be remembered,” Prague mayor Zdenek Hrib said after city council members voted to honour the two Russians.

Zhanna Nemtsova, one of the late politician’s daughters, attended the naming ceremony. “Do not silence opposition voices, that is what this is all about. That is what democracy is about,” Czech media quoted her as saying.

“Thank you to everyone who agreed to this renaming, but also to those who don’t like it. Because democracy is good when all views are heard, whatever they may be.”

Mr Hrib said the council was acting on a petition signed by thousands of people that called for Prague to honour Mr Nemtsov, a physicist by education who governed his home city of Nizhny Novgorod before serving as a deputy prime minister under Russia’s first post-Soviet president, Boris Yeltsin.

His star faded along with Russians’ enthusiasm for liberal, pro-western reforms, and he became a strident critic of Mr Yeltsin’s successor, Vladimir Putin, and of the corruption of his regime and its undeclared war against Ukraine.

He was shot dead a few hundred metres from the Kremlin while crossing a bridge over the Moskva river. As with Ms Politkovskaya’s murder, several men were convicted for the killing but whoever ordered it has not been identified.

“On the fifth anniversary of Boris Nemtsov’s murder, we again call on Russian authorities to investigate those who organised and ordered this horrific crime,” Rebecca Ross, spokeswoman for the US embassy in Moscow, wrote on Twitter.

EU spokesman Peter Stano said Mr Nemtsov “remains an inspiration to many, at a time when civil society and independent media in Russia are increasingly constrained . . . His murder should be investigated fully and in a transparent manner, to ensure that all those involved in this crime are held accountable.”

“We would prefer it, of course, if the [Prague] authorities at the same time didn’t forget about the Red Army and its soldiers, who gave their lives to free the city from the Nazis,” he added.

Russian officials have denounced Prague’s plans to relocate a monument to Red Army marshal Ivan Konev. China has also clashed with Mr Hrib over Prague’s support for Taiwan and Tibet.