Pope Francis wants to ‘open the doors’ to divorced and remarried

‘Communion alone is no solution, the solution is integration’ 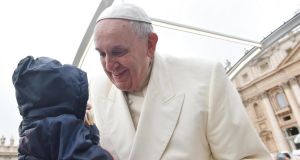 Pope Francis says he intends to travel to Africa once and to Latin America three times next year. Photograph: L’Osservatore Romano/EPA

Pope Francis has said he would like to “open the doors” to the divorced and remarried, saying they must be “integrated” into Church life.

“In the case of divorcees who have remarried, we posed the question, what do we do with them? What door can we allow them to open? This was a pastoral concern: will we allow them to go to Communion?,” the Pope asked in a recent interview.

“Communion alone is no solution. The solution is integration. They have not been excommunicated, true. But they cannot be godfathers to any child being baptized, mass readings are not for divorcees, they cannot give communion, they cannot teach Sunday school, there are about seven things that they cannot do...Thus, let us open the doors a bit more.”

Speaking in an interview with the Argentine daily, La Nación, the Pope also discussed opposition within the Church, the recent job switch of US Cardinal Raymond Burke, his own health, his travel plans for next year, curia reform and the October Synod of Bishops.

The 77-year-old recalled that prior to his election last year, he was getting ready for retirement. “Rome” was “all new” to him, he said.

“From the start I said to myself: ‘Jorge, don’t change, just keep on being yourself, because to change at your age would be to make a fool of yourself’...That’s why I’ve always kept on doing what I used to do in Buenos Aires. Perhaps even making my old mistakes. But I prefer it like this, to be myself.”

The interview was conducted by Elisabetta Pique, a Rome-based Argentine journalist who has known Pope Francis for over a decade and who has written a biography of him, Francis: Life and Revolution.

With regard to his health, the Pope suggested that, apart from the odd ache and pain, it is good, adding that he intends to travel to Africa once and to Latin America three times next year. However, the Pope did not indicate the countries he will be visiting.

Asked about the question of mounting opposition within the Church to his pontificate, Francis appeared unworried, saying that open, public dissent is always much better than plotting behind his back.

He also denied media speculation that the recent move of US Cardinal Raymond Burke from the Apostolic Signatura in the Vatican to become Patron of the Sovereign Military Order of Malta was in any way a demotion.

Cardinal Burke was one of a small group of senior Cardinals who had expressed their reservations about some of the issues discussed and directions taken at the Synod.

Pope Francis said the move had been agreed with Cardinal Burke long before the October Synod.

“He thanked me in very good terms and accepted my offer, I even think he liked it. Because he is a man that gets around a lot, he does a lot of travelling and would surely be busy there (at the Order of Malta). It is therefore not true that I removed him because of how he had behaved in the synod.”

With regard to the question of curia reform, Pope Francis said it would be a slow and complex process which “will take a long time” and which will certainly not be finished before the end of 2015.

On the weekend the new management of Vatican Bank IOR announced it had initiated a judicial enquiry into the past administration, the Pope said the restructuring was “operating beautifully”, doing “quite a good job there.”

As for the Synod and the questions it raised not just about the divorced but also about homosexuals and single parents, Francis said the concerns of some of the faithful are exaggerated partly because they have not read three key documents carefully — the post-Synod report, the post-Synod message and the Pope’s own post-Synod speech.