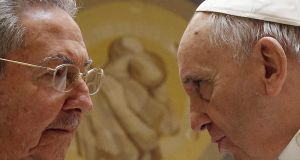 Pope Francis held a cordial hour-long meeting in the Vatican on Sunday with Cuban President Raul Castro, signalling the two men were in accord on issues of social justice.

Today’s meeting comes just three months before Pope Francis makes his first visit as pope to the Carribean island, the first leg of a pastoral visit which then moves on to the USA.

The Vatican’s constructive role in contributing to the historic USA-Cuba detente process announced last December by Mr Castro and US president Barack Obama was at the centre of this morning’s visit to the Pope.

Lest the gathered international press failed to get the point, Mr Castro spelt it out loud and clear, stopping before he got into his car to tell reporters that he had come to Rome expressly to thank Pope Francis for the Vatican’s help in the overall detente process.

Briefing reporters after the meeting, which took place in the study of the Paul VI hall right beside the Domus Santa Marta where the Pope lives, senior Vatican spokesman Father Federico Lombardi pointed out the cordial nature of the meeting. Not only had it lasted one hour but also the two men had talked together without interpreters or delegation members present.

The nature of the meeting, too, was reflected by a relaxed and smiling Pope Francis himself who afterwards stopped briefly to exchange greetings with the waiting Vatican press corps.

“I am sorry I have ruined your Sunday (with a very early start)...please remember to pray for me,” he said.

At the end of the meeting, the two men exchanged gifts which indicated much about the nature of their joint concerns.

Mr Castro gave the Pope a painting by Cuban artist Kcho, a painting which depicts a man in prayer in front of an improvised cross made from the wreckage of “boat people” vessels.

The artist, who was in the Cuban delegation this morning, explained to the pope that he had been inspired by the Pope’s visit, the first outside Rome of his pontificate, to the island of Lampedusa where hundreds of thousands of boat people have landed in recent years.

For his part, the pope gave Raul Castro a Saint Martin of Tours medal which shows the saint sharing his military cloak with a poor man, saying:

“San Martino sharing his cloak with the poor man is an indication of what we should do. We must deal with the suffering of the poor and help them.”

The pope also gave Mr Castro a copy of his apostolic exhortation, Evangelii Gaudium, saying to the Cuban leader that “this work contains many of those statements that you like”.

Mr Castro explained to the pope that Cuba and the Cuba people were looking forward keenly to preparing a very warm welcome for him next September, underlining the importance of the visit for the island.

The Vatican’s good relations with once hardline Communist Cuba are nothing new since, back in the 90s, Pope John Paul II made common ground with then Cuban President Fidel Castro, in relation to questions of social justice and distribution of the world’s wealth and food.

Today’s meeting comes just three days before one of the founding fathers of liberation theology, Peruvian Father Gustavo Gutierrez, is due to be unofficially “rehabilitated” when he takes part in a Vatican press conference, held to present the forthcoming Caritas General Assembly, entitled ‘One Human Family, Caring For Creation’.

For many years during the pontificates of popes John Paul II and Benedict XVI, liberation theologians such as Gutierrez were isolated by Rome which disapproved of a perceived Marxist bent in their social justice message.