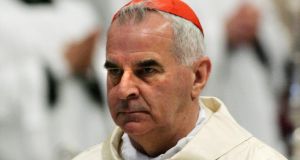 Cardinal Keith O’Brien’s resignation comes two years after he stepped down as Archbishop of St Andrews and Edinburgh, having admitted inappropriate sexual behaviour towards priests in the 1980s. Photograph: AFP/Getty Images

In an extremely rare move, the Vatican yesterday announced that the pope had accepted the resignation of the “rights and privileges” of a cardinal, on the part of disgraced Scottish cardinal Keith O’Brien.

The last cardinal to renounce this status was the French Jesuit, Louis Billot, in 1927, following a bitter disagreement with Pope Pius XI.

Two years ago, on the eve of the conclave which elected Pope Francis, Cardinal O’Brien caused a sensation when he announced that, in the wake of UK media allegations of sexual harassment of four priests by him in the 1980s, he would not be attending the conclave.

Initially rejecting the allegations, Cardinal O’Brien then issued an abject apology in which he said there had been times when “my sexual conduct has fallen below the standards expected of me as a priest, archbishop and cardinal”.

He also confirmed that he would “play no further part” in the life of the Catholic Church in Scotland, rather he would spend the rest of his life in retirement. Since then, he has taken no part in any public activity. Yesterday’s Vatican communiqué takes the process one step further, underlining his loss of privileges as a member of the College of Cardinals.

The statement reads: “The Holy Father has accepted the resignation of the rights and privileges of a cardinal . . . presented by His Eminence Cardinal Keith Michael Patrick O’Brien, Archbishop Emeritus of Saint Andrews and Edinburgh, after a long period of prayer . . . With this provision, His Holiness would like to manifest his pastoral solicitude to all the faithful of the Church in Scotland and to encourage them to continue with hope the path of renewal and reconciliation.”

Furthermore, insiders suggest the cardinal’s resignation of privileges might not be entirely spontaneous but rather called for by the pope. Even if this case does not involve paedophilia, the Holy See’s handling of it still looks like a step forward on the issue of clerical sexual misconduct and abuse.

Not everyone, however, is impressed. The Survivors Network of those Abused by Priests, the US lobby for survivors of clerical sex abuse, says the Vatican has disclosed “nothing about O’Brien’s wrongdoing”. It accuses it of a lack of transparency and asks whether any of the cardinal’s colleagues “knew of or suspected that O’Brien was abusing others”.

One sexual abuse lobbyist told The Irish Times he would be more impressed by the Vatican’s “so-called hard line” if it were to take action against Kansas bishop Robert Finn, convicted of failing to report a paedophile priest subsequently sentenced to 50 years in prison for producing child pornography.

The survivors network says the Catholic Church still refuses to discipline “those who conceal and enable sexual crimes and misdeeds”.